Sockeye has the reddest flesh of any salmon species, and its rich meaty flesh has a high oil content. Sockeye is graded 2-4, 4-6, 6-9, and 9 up. This salmon is marketed fresh, frozen, salted, canned. Generally the further sockeye are caught from their natal river, the higher the quality. There will be major quality differences because of natural variability more so than how fishermen and processors handle the product. Sockeye caught off Central Alaska’s Copper River and Canada's Fraser River tend to be larger and contain more oil than other sockeye runs. The number of sockeye available seasonally varies, and quality can also vary within the same run. 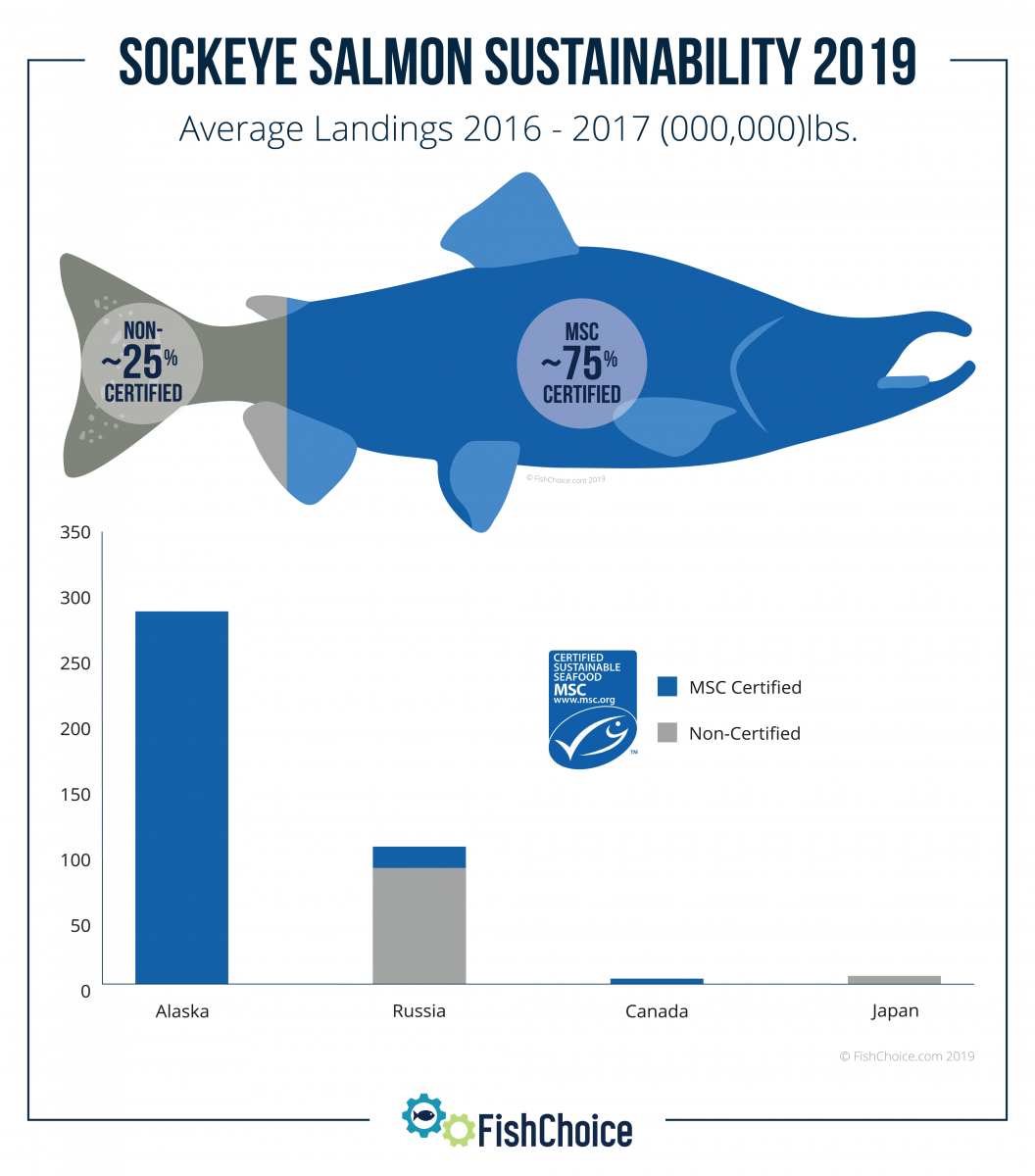 Sockeye salmon are amongst the smaller species of Pacific salmon, growing between 1.5 and 2.5 feet in length and four to fifteen pounds, and maturing around five years. Most salmon are anadromous, meaning they hatch in freshwater streams and rivers then migrate to the ocean to feed and grow. As sockeye salmon return to their freshwater spawning ground, their heads turn green, and their bodies a bright red, giving them their common name of “red salmon.” Sockeye are the only salmon species that display different spawning colors on the body and head. Typically, populations return after two to three years at sea, with some returning earlier and others later. Populations that return earlier are almost always male, called “jacks.” Spawning males develop hooked jaws with visible teeth and a humped back.

Spawning season for sockeye salmon occurs in the summer or fall. Females select the spawning site and dig nests, known as redds, with their tails where they deposit the eggs. Males swim over the redds to fertilize the eggs. Newly hatched salmon, known as alevins, remain in the gravel until early spring, when they then emerge as fry and migrate to the ocean after one to three years. All adult sockeye salmon die within a few weeks after spawning.

The alevins feed off the material stored in their yolk sacs until they emerge, where they then feed mainly on zooplankton, amphipods, and insects. Adult sockeye salmon living in the ocean feed on zooplankton, larval and small adult fish, and squid. Fish and birds feed on juvenile salmon. Sharks, lampreys, and marine mammals feed on adult salmon. Bears, eagles, and wolves feed on freshwater salmon.

In North America, sockeye salmon range from the Deschutes River in Oregon to northwest Alaska. The majority of sockeye salmon are anadromous, but some, known as “kokanee,” are non-anadromous and will spend their entire lives in freshwater. Sockeye salmon spawn in streams, rivers, and near lakeshores along North America. Juveniles will typically stay in these freshwater nursery grounds for the first one or two years of their lives. As they grow and mature, anadromous sockeye will migrate to the ocean to further grow and feed – generally for two or three years. During spawning season, adult salmon will leave the ocean and will return to freshwater. Spawning sockeye will migrate thousands of miles upstream to spawn – usually returning to the same river or stream of their own birth. In Russia, they occur from the Anadyr River area of Siberia to the Kuril Islands. Sockeye salmon are also found in northern Japan.

NOAA’s Pacific Coastal Salmon Recovery Fund (PCDRF), established in the year 2000, aids in the reversal of declining Pacific salmon and steelhead populations and contributes to their recovery by blending science, communities, and local economies to ensure that they are effectively and efficiently benefiting salmon populations. The increase in jobs and support has led to habitat restoration and protections projects resulting in significant changes in salmon habitat conditions and availability, as well as the re-establishment of previously inaccessible streams.

Furthermore, studies done by NOAA’s Alaska Fisheries Science Centre conduct research to better understand the relationship between ecological processes and the productivity of anadromous fish. The end goal is to organize and communicate their findings and provide guidance for decision-making. Their Auke Bay Laboratories’ (ABL) Salmon Ocean Ecology and Bycatch Analysis (SOEBA) program aids state and federal fishery managers in making informed decisions to help sustain populations, fisheries, and communities. The main focus of the lab is on: marine ecology research, forecasting salmon and groundfish recruitment, and evaluating the impacts of commercial fisheries on salmon populations. The lab’s Ecosystem Monitoring and Assessment Program (EMA) monitors changes in large marine ecosystems of the North Pacific, and informs on changes in marine salmon growth, health, and abundance in relation to adult salmon returns. Goals of the EMA include:

NOAA Fisheries, the North Pacific Fishery Management Council, and Alaska Department of Fish and Game manage sockeye salmon in Alaska under the Fishery Management Plan (FMP) for Fisheries in the EEZ Off Alaska. To allow for consistent management throughout the state, management of all salmon fisheries in federal waters is deferred to the State of Alaska and the Alaska Department of Fish and Game.

The Alaska Department of Fish and Game regulates the salmon fisheries in Alaska by setting escapement goals. These goals are in place to ensure that enough salmon escape the fishery and are able to successfully return to freshwater and spawn – replenishing the population. Each year, managers and scientists conduct in-season assessments to determine the number of salmon returning to freshwater to spawn. Based on these returns, harvest limits are set, and scientist and managers will monitor and record both catch and escapements in real time. When abundance is high and the number of fish returning is much higher than needed to meet escapement goals, harvest levels are set higher. When abundance is low, and catch levels are exceeding escapement goals, harvest levels are set lower and the fishery may close earlier than expected.  There are hundreds of different sockeye stocks in Alaska with some stocks being in decline and others remaining steady or increasing. Efforts to further conserve the population include:

The Pacific Salmon Commission helps coordinate management and research of shared international sockeye stocks between the US (Alaska, Washington, and Oregon) and Canada. The Commission is comprised of a sixteen-person body with four commissioners and four alternates representing the interest of commercial and recreational fishers as well as federal, state, and tribal governments from each country. The body was originally formed by the US and Canadian government to implement the Pacific Salmon Treaty. First ratified in 1985, the Pacific Salmon Treaty is a bilateral agreement that aims to prevent overfishing, provide optimal harvest, and ensure equal benefits of salmon production between the two countries. The US, along with Canada, Russia, Japan, and South Korea, is also a member of the North Pacific Anadromous Fish Commission. The primary goal of the Commission is to provide a mechanism for international cooperation of sockeye and other salmon species in the northern Pacific Ocean.

Sockeye salmon are rarely caught in the federally managed waters off the US West Coast that fall under the jurisdiction of the Pacific Fishery Management Council. However, there are sockeye fisheries in the Columbia River (Washington and Oregon), Fraser River (Washington), Puget Sound (Washington) as well as in smaller, coastal rivers throughout Washington. These fisheries are primarily managed through state agencies and tribal governments as well as the Pacific Salmon Commission. Captive rearing of salmon in hatcheries supports nearly all fisheries on the US West Coast.

Most sockeye salmon spawn near lakes and exhibit a wide variety of life history patterns. Their low fecundity is countered by a large production of eggs that get buried, making them fairly resistant to natural and fishing pressures. Sockeye stocks are healthy in Alaska, but the populations in California, the Canadian Pacific, Oregon, and Washington have experienced declines over the past 50 years due to habitat loss, climate change, pollution, introduced species, overfishing and dam construction.

The reefnet fishery around Lummi Island and San Juan Island in Washington divides salmon into four managed groups with different run-times. Early summer and summer sockeye there have the lowest conservation concern while late-run has the highest because the Cultus Lake sockeye is endangered in Canada, according to the Monterey Bay Aquarium.

Sockeye are usually caught with gillnets and purse seines, which rarely touch the seafloor so there is little lasting physical impact on these habitats. A taper built into one end of a purse seine ensures that the gear won’t drag along the seafloor. Trolling for salmon also results in little damage. The Monterey Bay Aquarium reported that the conservation concern in the reefnet fishery in Washington is very low.

Salmon fishing tends to be highly selective due to management measures and the methods used, resulting in low bycatch rates overall, according to the Monterey Bay Aquarium. Bycatch of non-salmonids is minimal in the reefnet fishery as well. A small number of sockeye salmon are accidentally caught in the pollock fishery. Endangered or threatened salmon species may end up as bycatch in mixed-stock fisheries. This remains a concern in California, the Pacific Northwest and the southeast Alaska troll fisheries.

Sockeye salmon in Alaska are well managed by the Alaska Department of Fish and Game to about their maximum sustainable yield, according to Seafood Watch. Management measures include limits on gear, area restrictions, and limits specific to salmon species. Seafood Watch reported that management in the reefnet fishery is effective and gave it a green rating. Strict and effective management measures are in place for sockeye in Washington, Oregon and California. A Seafood Watch report from 2016 noted that significant progress had been made in managing salmon along the U.S. West Coast. Despite the complicated presence of endangered species, management of most of these salmon fisheries is considered to be careful and highly effective.