Yellowfin tuna is available fresh, frozen, and canned. Canned yellowfin tuna is marketed as "light" tuna and is slightly darker than albacore. While yellowfin tuna quality is difficult to determine due to subjective criteria, number 2 quality is usually adequate for the U.S. market while Number 1 quality is primarily exported to Japan. Fresh and frozen yellowfin is sold to foodservice operators as loins and steaks. Early fall is a good time to buy fresh yellowfin tuna, as demand drops and landings are normally still quite good. Frozen yellowfin is commonly treated with carbon monoxide or tasteless smoke to prevent the red color of the fish from going brown. If abused, carbon monoxide can be used to enhance the color of lower grade yellowfin. However, fresh yellowfin loins and steaks are rarely treated with carbon monoxide to maintain color. 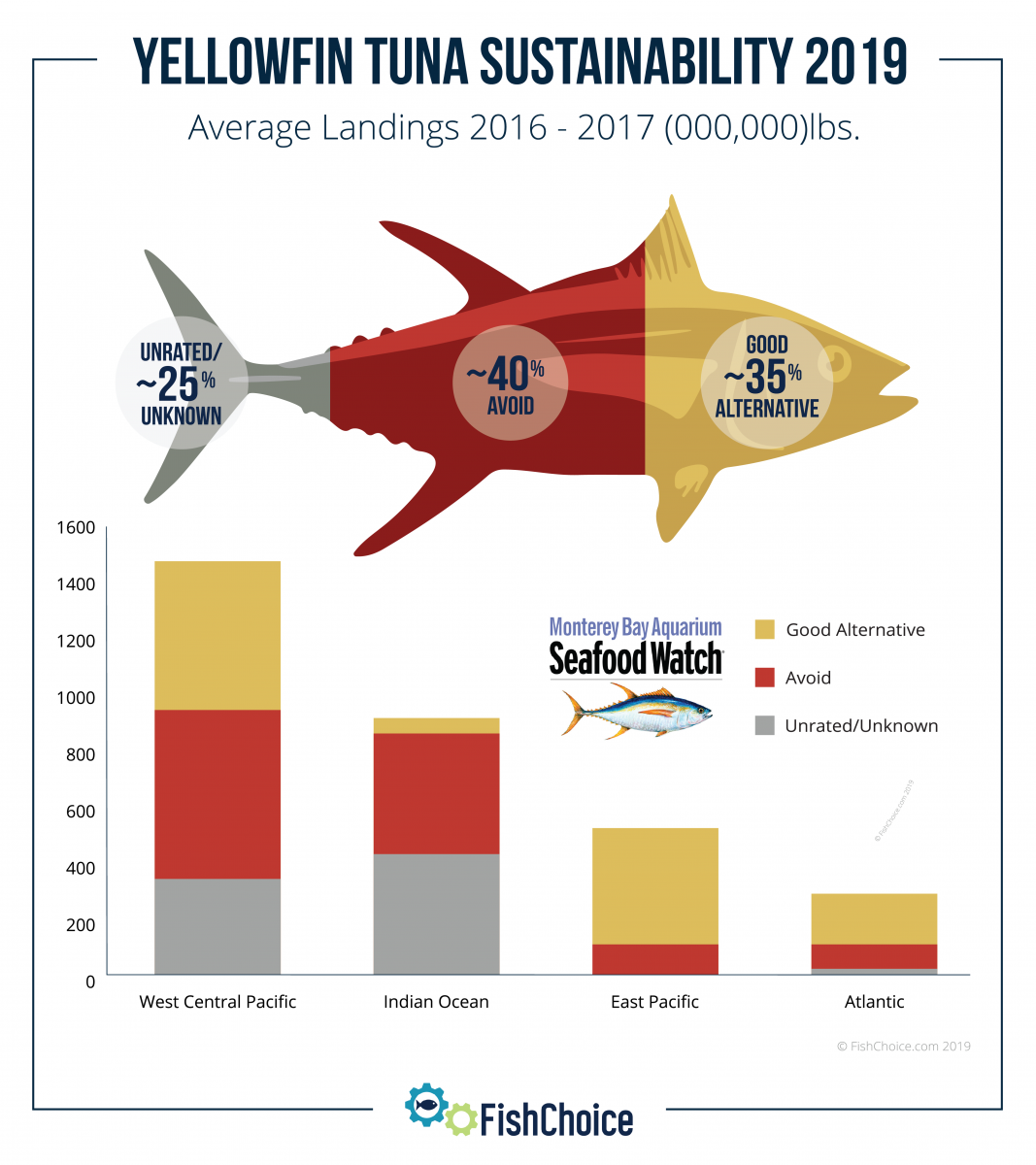 Key sustainability sourcing notes for yellowfin tuna based on landings data from 2016-17 and the most recent Seafood Watch recommendations and MSC certifications as of October, 2019, are as follows:

Yellowfin tuna are distinctive from other tunas by their long, bright yellow dorsal fin and yellow stripe down the side. They are also more slender than bluefin tuna and their torpedo-like shape allows them to reach speeds up to 50 miles per hour (80 km per hour). Tunas have hearts that are ten times larger for their body weight, pump three times more blood, and have blood pressure three times higher when compared to less active fish species. These factors allow them to maintain faster speeds for farther distances.

By folding their fins into special indentations, yellowfin tuna are able to streamline their bodies to swim faster. Their blood has a counter-current heat exchanging system, and high oxygen affinity and capacity for oxygen offloading, allowing yellowfin tuna to maintain a comfortable body temperature and a regulated metabolic rate in cold and oxygen deficient waters.

Yellowfin tuna grow quickly, and can reach up to seven feet in length (about two meters) and can weigh up to 400 pounds. However, tuna that are caught most often weigh around 80 pounds, with some weighing upwards of 200 pounds. They have a relatively short lifespan, living for about seven years. They reach maturity between ages two and three years, when they measure around three feet in length (about one meter).

Spawning season of this species occurs year-long - with a peak in the summer - over a wide area of tropical and subtropical oceans, as long as certain environmental conditions (i.e. water temperature and forage availability) are suitable. Females spawn every three days during peak spawning season, producing an average of one to four million eggs each time. As is believed with other tropical tuna species, environmental conditions are thought to greatly influence recruitments levels for yellowfin tuna.

Yellowfin tuna feed near the top of the food chain on fish, squid, and crustaceans. Fish, seabirds, and other animals eat juvenile and larval yellowfin tuna, while top predators, such as sharks, large fish, and marine mammals prey on adult tuna.

Yellowfin tuna are open-water pelagic and oceanic species. They are highly migratory and can swim across entire oceans. They are found in the subtropical and tropical areas of the Atlantic, Indian and Pacific Oceans. Yellowfin tuna have geographic limits from 45°- 50° N and South, although in the Pacific they occur mainly from 20° N and South. In the eastern Pacific, this species ranges from southern California and the southwest and central eastern parts of the Gulf of California to Peru, including all of the ocean islands. They are sensitive to low concentration of oxygen and are not usually found below a depth of 820 feet (250 meters) in the tropics. Yellowfin tuna prefer waters between the temperatures of 65℉ to 88℉ (18-31°C). Larval distribution is transoceanic, but seasonal changes can affect larval density in subtropical waters. It is believed that larvae occur only in warm water above the ocean’s thermocline. Schooling occurs more commonly in near-surface waters. Juvenile yellowfin tuna travel in schools with skipjack and juvenile bigeye tuna. The species forms adult schools (both free and associated) of similarly sized individuals. The free swimming schools tend to contain larger tunas and are generally mono-specific. Association with floating debris and other objects has also been observed. Some associated schools found in the eastern Pacific contain dolphin pods.

Yellowfin tuna is widely distributed throughout tropical and subtropical oceans. They are highly fecund with a moderate lifespan, making them fairly resistant to fishing pressure. A Seafood Watch report from 2014 stated that there is uncertainty about yellowfin tuna populations in the Atlantic as well as some indication that they are overfished and unsustainably fished. Seafood Watch also reported that yellowfin tuna are overfished in the eastern Pacific Ocean but healthy in the western and central Pacific. In the Indian Ocean, yellowfin populations are healthy and fishing mortality rates are low.

Yellowfin tuna are caught in fisheries that target other tuna species. Slightly more than half of all tuna landed worldwide, including yellowfin, is caught with purse seines that have minimal impacts on ocean habitats. However, anchored fish aggregating devices (FADs) could result in contact. The pelagic longlines, trolls and poles used to catch yellowfin tuna also present a low risk to the seabed and bottom habitats, according to Seafood Watch.

With the exception of the troll, pole and handline fisheries, bycatch in yellowfin fisheries is high. Unintended catch includes threatened and endangered marine mammals. Dolphins, sea turtles, sharks, other tuna, marlin, manta rays, wahoo, stingrays and juvenile tunas are among the bycatch, which is increased with the use of fish aggregating devices (FADs). Longline tuna vessels in the Atlantic are required to collect and report bycatch and discard information. They must have equipment for the safe handling, disentanglement and release of sea turtles, and the captain must be trained on correct techniques.

Starting in 2013, countries in the Atlantic that have not reported shortfin mako shark catch data are prohibited from catching them, according to a 2014 Seafood Watch report. Although fishermen back down purse seine nets for dolphins to escape in the eastern Pacific, the animals can still die from net canopy collapses and stress. The deaths are declining but dolphin populations haven’t yet recovered.

Yellowfin are managed by several fishery management organizations worldwide. The International Commission for the Conservation of Atlantic Tunas (ICCAT) manages them in the Atlantic. ICCAT’s tuna conservation and management program was amended in 2011 to include yellowfin but recovery plans have not been in place long enough to judge their success. Seafood Watch rated the Commission’s bycatch strategy “ineffective” because it doesn’t meet best practices. In addition, there are no bycatch cap or catch limits.

Yellowfin tuna are managed in the U.S. and Canadian longline fisheries by the National Marine Fisheries Service and Fisheries and Oceans Canada. While Seafood Watch rated most of the management strategies as moderately effective, the bycatch strategy was called ineffective in the Canadian North Atlantic longline fishery because it does not require best practices for reducing incidental shark capture. Observer coverage was also lacking.

In the Pacific, the Inter-American Tropical Tuna Commission (IATTC), the Western and Central Pacific Fisheries Commission (WCPFC), the Western Pacific Regional Fishery Management Council (WPRFMC) and the state of Hawaii all manage tuna. Management measures in the western and central Pacific Ocean longline fishery, including ones mitigating bycatch, were rated moderately to highly effective in a 2014 Seafood Watch report. However, management in the eastern Pacific longline fishery did not meet best practice requirements and scientific advice was not always followed, according to a separate report.

Seafood Watch rated the management in the western, central and north Pacific yellowfin purse seine fishery between ineffective and moderately effective. The WCPFC lacks limits on the number of FAD sets allowed annually.

The Indian Ocean Tuna Commission (IOTC) and the Sri Lankan Ministry of Fisheries and Aquatic Sciences manage tuna in those regions. The management was given a red score by Seafood Watch due to a lack of measures to improve monitoring, a lack of total allowable catch, lack of bycatch data as well as poor bycatch mitigation. Seafood Watch also pointed to IUU fishing issues in the Indian Ocean.