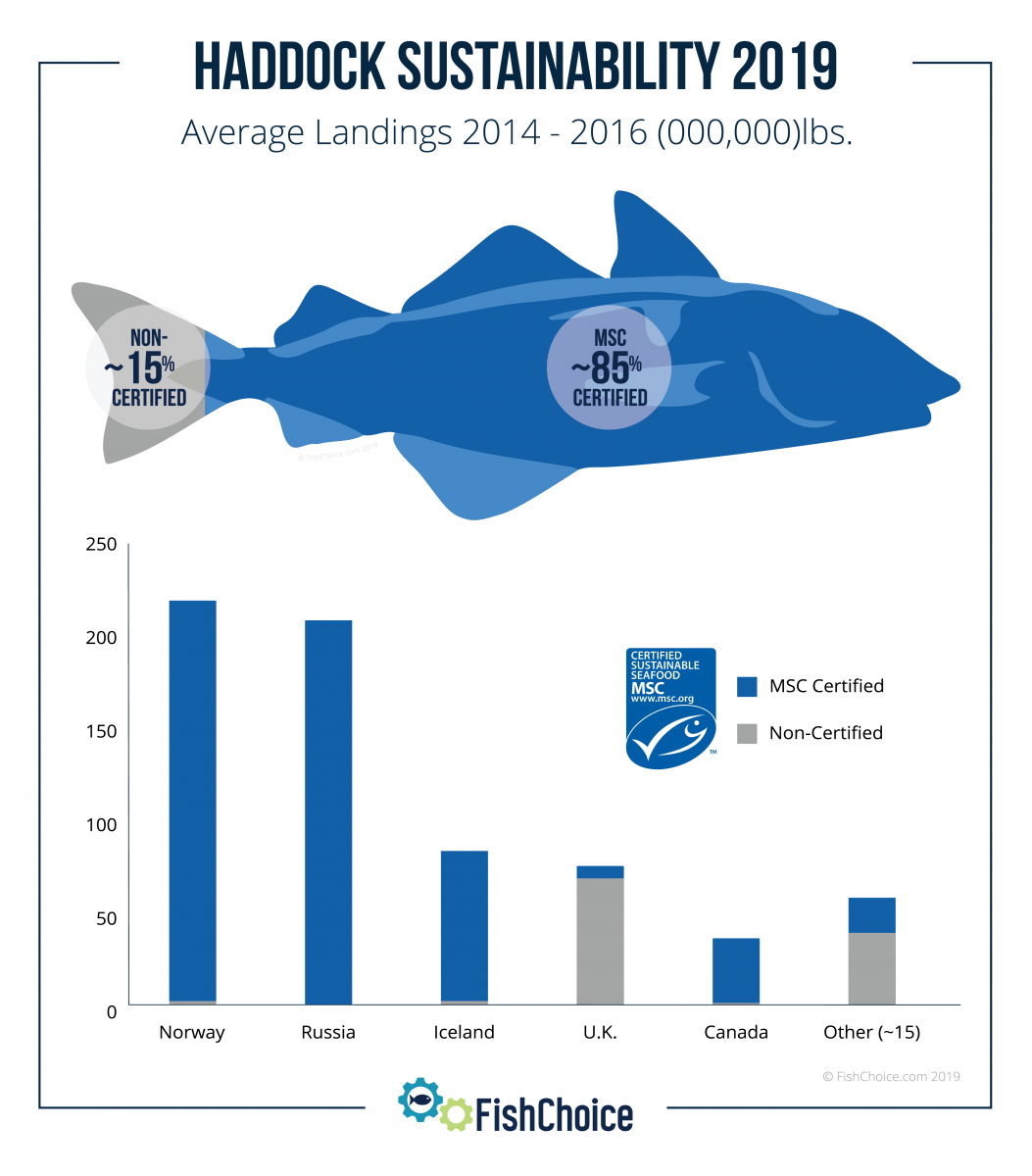 Key sustainability sourcing notes for haddock based on landings data from 2014-2016 and the most recent Seafood Watch assessments and MSC certifications as of February, 2019:

Haddock are a member of the cod family, distinguishable by a black spot, resembling a thumbprint, found on either side of their body. They are a smaller size than Atlantic cod but grow quickly, weighing between two and seven pounds, and reach one to three feet (30 cm to 91 cm) in length. They reach maturity between one and four years old and can live to over 10 years old; however, most are caught between three and seven years in age.

Spawning season occurs between January and June. An averaged-sized female can produce around 850,000 eggs, and a larger female can produce upwards of three million eggs. The eggs are released near the ocean floor, where a male will fertilize them. After fertilization, the eggs rise to the surface and drift with the current for about a month, until they hatch. The larvae remain near the surface for 30-45 days, before settling near the bottom.

Haddock feed on bottom-dwelling creatures, including mollusks, worms, crustaceans, and sea stars. Adults are known to also eat small fish such as herring. Haddock are preyed upon by many groundfish species such as cod, pollock, monkfish, halibut, etc. Marine mammals such as grey seals also prey upon adult haddock.

Haddock are found in both the eastern and western North Atlantic. In the western North Atlantic, they range from the Strait of Belle Isle, Newfoundland to Cape May, New Jersey. They are abundant in the Gulf of Maine and Georges Bank – being more abundant in the latter. Haddock can inhabit depths between 32 and 656 feet (10 and 200 meters) deep but are more commonly found in waters between 130 to 500 feet (40 to 152 meters) deep. They prefer temperatures below 45 degrees Fahrenheit (seven degrees Celsius). Haddock are demersal and live near the sea bottom generally around gravel, pebbles, clay, hard sand, and shell-based seabeds. Juveniles will inhabit shallower waters than adults and will occur near bank or shoal areas. Adults inhabit deeper waters, but each spring will move into shallower waters to spawn.

Haddock are primarily fished in the U.S. and Canada along the North Atlantic. A smaller fishery exists in Iceland as well. Haddock matures at a young age and has a moderate lifespan, making it fairly resilient to fishing pressure. Starting in the late 1970s, North Atlantic haddock stocks began to be overfished and then crashed in the 1990s. Recovery didn’t begin until the late 1990s. Currently Georges Bank haddock are fished at a sustainable level, although fishing pressure in the Gulf of Maine remains too high, according to the Monterey Bay Aquarium. Haddock stock is a moderate concern in Iceland.

Most haddock in Canada, the U.S., and Iceland is caught with bottom trawl gear, which can harm the seafloor. A small amount of North American haddock is caught with hook and line, the most sustainable method for catching haddock because it minimizes bycatch and preserves the seafloor.

Bycatch is a serious concern in this fishery, mostly consisting of Atlantic cod and cusk. In Canada, overfished cod have “special concern” status and cusk are “threatened.” Other bycatch includes yellowtail, winter flounder, and white hake. Some fishermen use an eight-foot mesh in the front end of their nets called a haddock rope trawl or eliminator trawl that allows cod and other fish to escape, reducing bycatch.

The Atlantic haddock fishery is considered effectively managed. In the United States, haddock are managed by the Northeast Multispecies Fishery Management Plan, which includes area closures, equipment restrictions, minimum catch size, total allowable catch requirements, as well as a cap on bycatch. An amendment in 2010 expanded catch-share management and increased operational efficiency, according to the Monterey Bay Aquarium. Internationally, haddock falls under the International Council for the Exploration for the Sea. Management of the haddock fishery in Iceland is considered moderately effective.