Skipjack is the species most commonly used in canned tuna. It is mainly sold as “canned light” or “chunk light” tuna, and it is also available fresh and frozen. Skipjack has the most pronounced taste of all of the tropical tunas and when raw, good-quality skipjack meat is deep red. Smaller fish are lighter red. Cooked skipjack becomes light gray. Some canned skipjack maybe be mixed with yellowfin tuna when the species aren't separated at harvest. Some sushi markets prefer skipjack tuna because it’s comparable to yellowfin tuna when fried or grilled. 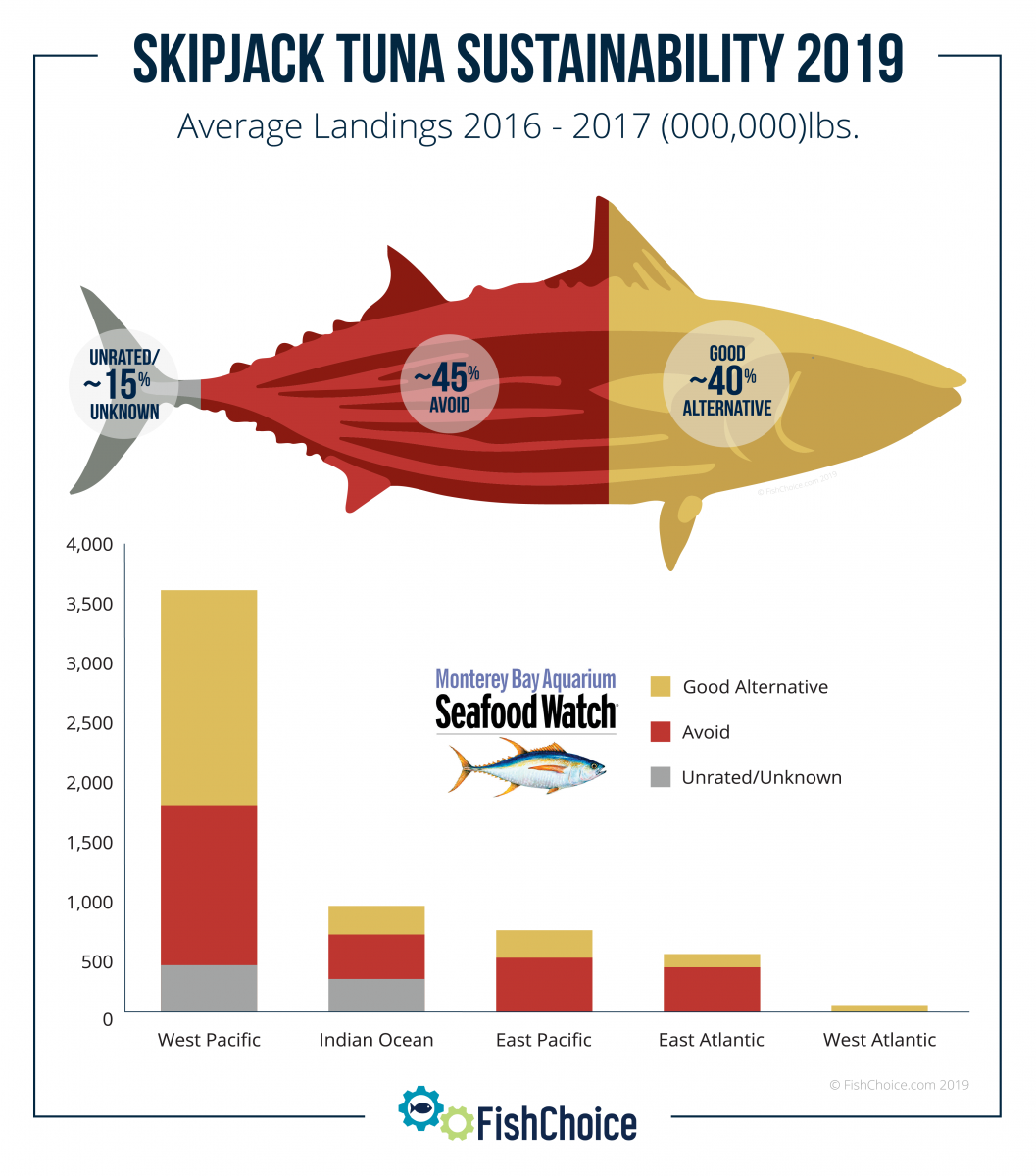 Key sustainability sourcing notes for skipjack tuna based on landings data from 2016-2017 and based on the most recent Seafood Watch assessments and MSC certifications as of May, 2019:

Skipjack tuna do not have scales on the majority of their body. The corselet and lateral line are markers on the fish’s head and across their body that are made up of a band of larger, thick scales. Unlike other tunas, skipjack are cold-blooded and cannot control their body temperature.

Skipjack have a lifespan between 8 to 12 years old. They grow quickly, up to four feet (over one meter) in length and can weigh more than 70 pounds in the Pacific, and up to three feet (one meter) in length and forty pounds in the Atlantic. Skipjack reach maturity around one year old. They spawn throughout the year. Females can produce between 100,000 and two million eggs at a time, depending on their size. Skipjack tuna reproduce through broadcast spawning, where eggs and sperm are released into the water column at the same time. The eggs hatch one day after fertilization.

Skipjack tuna are opportunistic feeders, preying on a variety of fish, crustaceans, cephalopods, mollusks, and other tuna. Large pelagic fish such as billfish, sharks, and large tuna feed on skipjack tuna.

Skipjack tuna are found in temperate tropical and subtropical waters throughout the world’s oceans. There are five populations of skipjack tuna: western and central Pacific, eastern Pacific, eastern Atlantic, western Atlantic, and the Indian Ocean. The US fishery occurs along the western Atlantic from Massachusetts to Florida and into the Gulf of Mexico. The US pacific fishery extends from California to Hawaii, including US Pacific Island territories and the high seas. Skipjack tuna are pelagic and will spend the majority of their lives living in large schools in the open ocean. These schools tend to aggregate around floating objects, convergence areas (boundaries between cold and warm water), and upwelling areas where nutrient-rich, colder water meets warmer, nutrient-depleted water and is pushed to the ocean surface. Bigeye and yellowfin tuna are also known to join skipjack in these schools. Like many tunas, skipjack are highly migratory and are known to make large-scale migrations to feed and reproduce. Skipjack tuna can be found near the ocean surface to depths of 850 feet (260 meters) throughout the day. At night they tend to be restricted to the ocean surface.

NOAA’s Pacific Islands Fisheries Science Center (PIFSC) has developed the Pacific Tuna Tagging Project (PTTP) in 2006 to tag and release skipjack, yellowfin, and bigeye tuna throughout the Western and Central Pacific Ocean. The goal of the PTTP is to improve stock assessments, and better understand the status of the stocks and tuna movements.

A 2010 study published by NOAA found that tuna and billfish populations are more vulnerable to fishing pressure because of shrinking habitat. An expanding hypoxic zone (an area of low oxygen) in the Atlantic Ocean is decreasing oxygen-abundant habitats, forcing the species into shallower waters where they are more vulnerable to predators and fishing. The hypoxic zones occur naturally in tropical and equatorial oceans; however, they are going to continue expanding and increasing in number as sea temperatures rise. Fish that prefer these habitats will move to shallower areas, increasing their catch rates, and giving the appearance of greater abundance than actually exists, thus affecting population and stock assessments. Higher water temperatures absorb less oxygen, and climate change will increase the expansion of hypoxic zones in the world’s oceans.

In 2011, researchers at the Ocean Science Series of the PEW Environment Group found that increasing the use of fish aggregating devices (FADs) changes the species composition of tuna catches. Vessels targeting skipjack tuna will also catch a large amount of juvenile yellowfin and bigeye tuna. This impacts the biology and ecology of skipjack, bigeye, and yellowfin tuna, as younger individuals are being caught and the population is not able to replenish itself.

NOAA Fisheries and NOAA Fisheries’ Atlantic Highly Migratory Species (HMS) Division are responsible for managing the US Atlantic skipjack tuna fishery under the authority of the Atlantic Tunas Convention Act and the Magnuson-Stevens Fishery Conservation and Management Act. Atlantic skipjack tuna, along with other HMS like sharks and swordfish, are managed under the 2006 Consolidated Atlantic Highly Migratory Species Fishery Management Plan (FMP). Under the FMP, federal management regulations apply to all US states with the exception of Maine, Connecticut, and Mississippi. Among measures the FMP includes are permit requirements and gear restrictions.

Skipjack tuna are a highly migratory species that move between the jurisdiction of multiple nations as well as the high seas, and as such their management requires international cooperation. The United Nations Law of the Sea indicates that the management of HMS be carried out through Regional Fishery Management Organizations (RFMOs). RFMOs are the only legally mandated fishery management body on the high seas. The RFMO responsible for the management of Atlantic tunas, as well as other Atlantic HMS, is the International Commission for the Conservation of Atlantic Tunas (ICCAT). ICCAT is made up of 51 contracting parties including the United States, Canada, Japan, China, Russia, and the United Kingdom. ICCAT assesses the abundance of Atlantic skipjack tuna and evaluates current and proposed harvest practices. All contracting parties must record and report catch and effort data of which ICCAT uses to set total allowable catch (TAC) limits. Aside from keeping catches below maximum sustainable yield, there are currently no specific management recommendations for Atlantic skipjack tuna and there is currently no TAC limit for the species. While no specific measures are in place for skipjack, measures ICCAT has adopted to protect other tuna species are thought to generally benefit skipjack tuna. NOAA Fisheries uses conservation and management measures adopted by ICCAT, along with their own research, to set regulations for the US Atlantic skipjack fishery.

Like their Atlantic counterparts, Pacific skipjack tuna are migratory, cross international boundaries and the high seas, and are fished by many nations. As such, their management requires international cooperation. In the Eastern Pacific, the Inter-American Tropical Tuna Commission (IATTC) is the RFMO tasked with managing the international skipjack fishery and with developing target and harvest limit points. Composed of over 20 different nations including the United States, Canada, China, Belize, Costa Rica, and Mexico, IATTC sets management measures that all member nations must adhere to. In the Eastern Pacific, IATTC has set management measures for the purse seine and longline fisheries which include time and area closures, 100 percent observer coverage on large vessels, and requirements that all vessels in the purse seine fishery retain all tuna caught. As the troll and pole fishery has a relatively minor impact on the stock (in comparison), most management measures do not apply for that fishery. IATTC assesses skipjack on a regular basis, and participating countries provide catch data to IATTC via logbooks, observer programs, unloading reports, and export/import records. Additionally, member countries must report to IATTC annually on compliance, monitoring, and control measures. Any purse seine vessel operating in the Eastern Pacific must also operate in accordance to the International Dolphin Conservation Program, which works reduce bycatch of dolphins and undersized tuna. IATTC has established interim target and limit reference points as well as interim harvest control rules for Eastern Pacific skipjack.

Most of the global harvest of skipjack tuna occurs in the Western Central Pacific Ocean (WCPO) – with US fisheries accounting for roughly nine percent of this total harvest. Of that nine percent, the majority of the US harvest occurs in Hawaii, with some landings occurring in US Pacific Island territories (American Samoa, Guam, etc.). The Western and Central Pacific Fisheries Commission (WCPFC) is the RFMO in charge of managing the international and high seas skipjack fishery in the WCPO. WCPFC is composed of over 25 member countries including Australia, China, New Zealand, Indonesia, Japan, France, the United States, and the Republic of Korea. Among measures member nations adhere to are:

The WCPFC regularly monitors and assesses skipjack tuna stocks. However, target reference points are not in place for any tuna species in the WCPO (with the exception of bigeye in the short-term) and there are currently no harvest control rules. A WCPFC working group is working to address target reference points.

The Indian Ocean Tuna Commission (IOTC) is the RFMO charged with managing skipjack tuna in the Indian Ocean. Among management measures in place for member countries are: reference points and harvest control limits, bycatch mitigation strategies (particularly with sea turtles, juvenile tunas, and sharks), and observer coverage (IOTC requires at least five percent of vessels have an observer). Additionally, IOTC members must have a FAD management plan that includes information on the fleet, number of drifting FADs, logbooks, and monitoring and review plans. IOTC member nations require all tuna caught by purse seiners be retained and landed, and encourages retention of other non-targeted finfish. Member countries are required to record and report catch and effort data by species and gear type.

Skipjack is a small tuna with short lifespans as well as rapid growth and reproduction rates, making them resilient to fishing pressure.

Skipjack stocks in both the Atlantic and Pacific are currently estimated to be above target levels, according to the U.S. Marine Fisheries Service.

In the United States, most skipjack tuna is caught off Hawaii using troll and pole-and-line gear. Since handgear doesn’t connect with the seafloor, it has no impact on that habitat. In the Western Pacific, where most skipjack are landed, skipjack tuna are caught using purse seines which have little, if any, impact on habitat.

When skipjack is caught using pole-and-line or troll gear, the bycatch is minimal because these fisheries are so selective. However, most skipjack worldwide are caught with purse seine fleets known to catch non-targeted fish such as juvenile bigeye and yellowfin tuna, wahoo, and mahi mahi. Purse seines that use fish aggregating devices (FADs) are more likely to accidentally catch sea turtles, dolphins, sharks, and marlin. Longlines result in large amounts of bycatch, including threatened or endangered sea turtles, seabirds, and sharks. When skipjack tuna are caught without fish aggregating devices, bycatch is reduced but the skipjack is not separated from other tuna caught with more impactful gear.

Internationally, skipjack tuna management falls under several agencies: the Inter-American Tropical Tuna Commission (IATTC), the Commission for the Conservation and Management of Highly Migratory Fish Stocks, the International Convention for the Conservation of Atlantic Tuna (ICCAT), and the Indian Ocean Tuna Commission (IOTC). Management and monitoring varies by region. Skipjack is well monitored in the Pacific and Atlantic Oceans, but information in the Indian Ocean is considered inadequate. Overall, skipjack tuna fishery management measures tend to be vague, according to the Blue Ocean Institute. Attempts to curb FADs have been made but the devices continue to be used.