Monkfish have a mild taste and texture similar to lobster to the extent that they are sometimes called “the poor man’s lobster.” Fishermen tend to remove monkfish tail meat and livers to sell, discarding the rest. Monkfish is sold fresh whole, in skinless tail fillets, and whole skin-on tail fillets as well as frozen skinless tail fillets and whole skin-on tails. Tail meats range from 1-4 lbs. and the meat is dense, boneless, and firm. Tail meat should have flesh that’s off-white to pale gray when raw. Avoid tails that are discolored at the edges and headless monkfish that have dried up blood, indicating it’s begun to age. 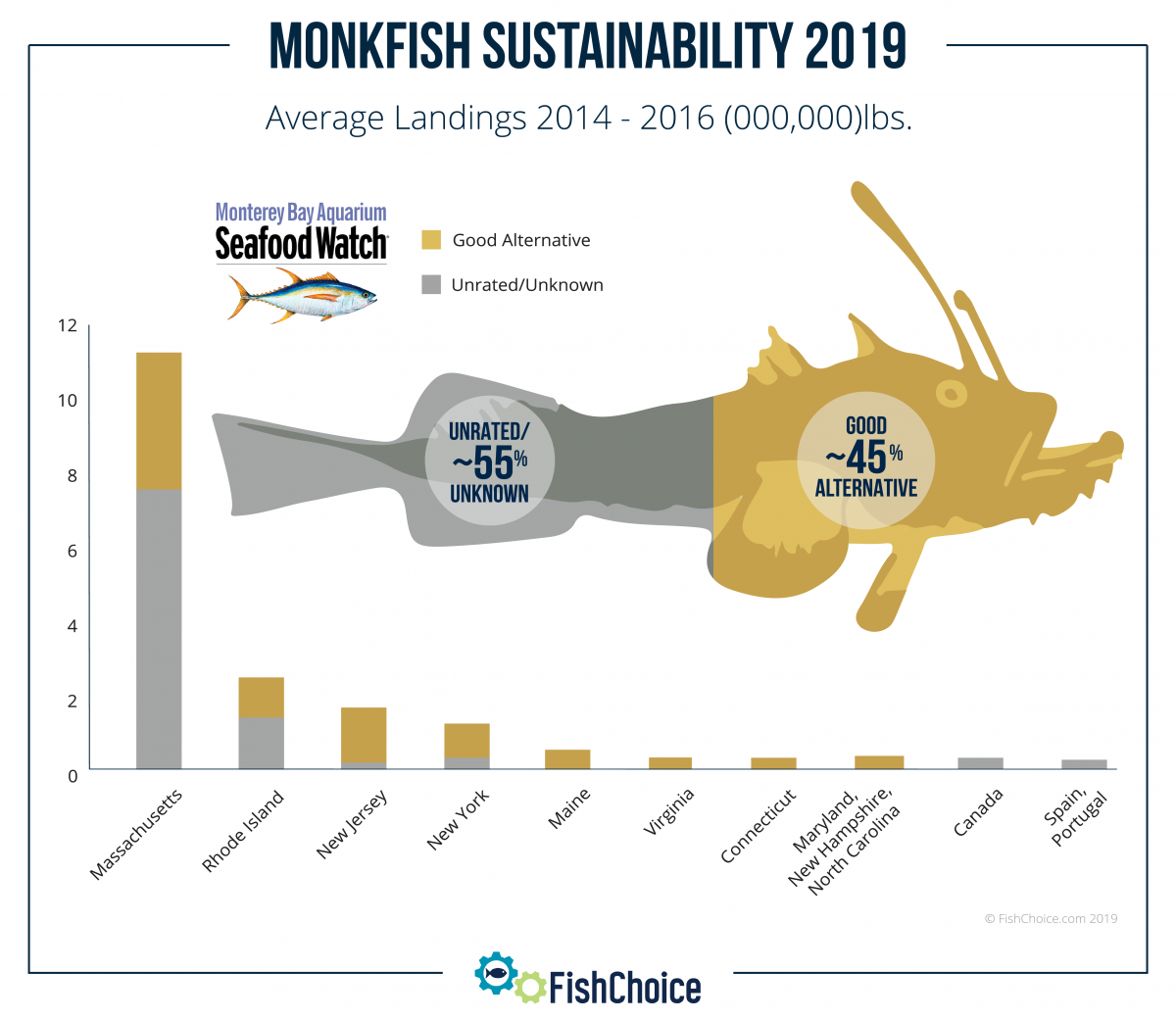 Key sustainability sourcing notes for monkfish based on landings data from 2014-2016 and the most recent Seafood Watch ratings as of March, 2019:

Female monkfish release large egg veils containing more than one million eggs. The veil floats near the surface with the current until it disintegrates and the larvae hatch. The larvae feed on zooplankton, and the juveniles eat small fish, shrimp, and squid. Adult monkfish eat fish, including other monkfish, as well as crustaceans, mollusks, seabirds, and diving ducks. Overall, monkfish are opportunistic feeders, eating the most available prey at the time. Monkfish hunt by ambushing their prey, using a modified spine on their head as a fishing pole to bait and lure them to their mouths. Once the prey is close, the monkfish sucks them into their mouth, trapping them behind rows of backwards-pointing teeth. While most predacious fish such as swordfish, sharks, and thorny skate preys upon small monkfish, larger monkfish have few predators.

Monkfish are found from the Grand Banks and northern Gulf of St. Lawrence to Cape Hatteras, North Carolina. Juveniles are pelagic while adults are found on the ocean floor, often in a depression or partially covered in sediment. Adults prefer living near sandy, muddy, and shell habitats and can tolerate a wide array of temperatures and depths – from inshore waters down to 3,000 feet. They also spend time off the sea floor, most likely riding ocean currents during seasonal migrations to spawn and feed.

Monkfish, a deep-water species found along the Atlantic coast of the U.S. and Canada, have characteristics including slow growth and dense aggregation that make them vulnerable to fishing pressure. Following increased demand in the 1980s and 1990s, monkfish were found to be overfished in 1999. Fishery managers implemented a rebuilding plan and in 2008, monkfish was declared rebuilt. Stock assessments done in 2013 showed that monkfish is not overfished or subject to overfishing, according to the U.S. National Marine Fisheries Service.

Monkfish are caught with either bottom gillnets or bottom trawls. While bottom trawls and gillnets can have a significant impact on seafloor habitat, the gear used to catch monkfish operates in muddy and sandy areas that tend to be resilient to disturbance.

The monkfish fishery has bycatch that has included protected species such as sea turtles, large whales, harbor porpoises and Atlantic sturgeon, according to the U.S. National Marine Fisheries Service. Bycatch primarily occurs through entanglements with gillnets, but strict measures are being taken to reduce the risk. Some intsitutes report that it is often is difficult to attribute gillnet deaths of marine animals and turtles to a particular fishery.

Monkfish fishery management measures include area closures, area restrictions, annual catch limits, minimum harvest size and gear requirements such as limits on large-mesh gillnets. The Monterey Bay Aquarium reports that total allowable catches have been frequently exceeded in the past, although the fishery has been improving on that in recent years. The monkfish fishery previously had an "Avoid (red)" rating from the Monterey Bay Aquarium but management actions and changes to the biomass targets helped that change to a "Good Alternative (yellow)" rating in 2012.