Albert’s primary role is to assure that FIPs on FisheryProgress are accurate and provide full documentation and evidence of their status and progress. He also engages with FIP implementers, NGOs and businesses to keep them informed about FisheryProgress. He has more than 20 years of national and international experience in fisheries biology, management, and sustainability. Before joining FishChoice in 2016, Albert worked for NOAA Fisheries and served as a consultant for FishWise and the Marine Stewardship Council. He also worked as a Quality Assurance Team Leader at Select Fish - Whole Foods Market. Originally from Chile, Albert has also served as a member of the Chilean delegation for the South Pacific Regional Fisheries Management Organisation and its Scientific Committee. He also worked in Chile as a lobbyist advocating for legislation to achieve a transparent and accountable fisheries management system. Albert holds a Master of Marine Affairs degree from the University of Washington and a B.S in Marine biology from the University of Concepción, Chile.

As founder and CEO of FishChoice, Richard is responsible for ensuring that FishChoice remains a leader in the creation of tools for industry and conservation organizations. His chief responsibility is to maintain a team that delivers true value for conservation. Prior to founding FishChoice in 2008, Richard helped to build FishWise (another conservation organization) by designing programs for seafood retailers and a mercury labeling program. Richard serves on the Steering Committee for the Conservation Alliance for Seafood Solutions and was a Seafood Champion finalist in 2016. He spent 12 years in the hospitality industry as a chef, manager and seafood buyer for independent and corporate restaurants including Chart House and Landrys. Richard Graduated from the University of California and Santa Barbara with a B.A. in business economics.

Richard became involved in conservation because he believes that humans have a direct responsibility to preserve the planet in which we live. He has a love of seafood and believes that there are many advancements that the seafood industry can make in wild capture and aquaculture technologies to create sustainable food sources for humans.

Brett’s work at FishChoice is to design and implement technology tools to further FishChoice’s sustainability and business-focused programs. He is also responsible for the care and feeding of our two main websites FishChoice.com and FisheryProgress.org.

Prior to FishChoice, Brett ran his own consulting business, Digital Timber, which was designed specifically to bring practical technology tools to conservation work. He has worked on numerous tech projects in the ocean conservation community and on other environmental issues such as sugarcane and palm oil, as well as STEM education and social metrics. Brett has worked at the intersection of technology and sustainability for 15 years since getting his Master’s degree in Environment Management from Yale University.

Favorite Ocean Activity: Brett’s favorite ocean activities are snorkeling amongst the fishes and trying to spy octopus, along with kayaking various bays, sounds and beautiful coastlines.

Favorite Ocean Movie: His favorite movie about the sea is Waterworld. Oh wait, that can’t be right. Let’s go with the Life Aquatic. In general, Brett likes to nerd out on all things music, nature, comedy, and travel.

As the Program Coordinator for FishChoice, Margaret splits her time working on projects for both the FishChoice.com and FisheryProgress platforms. She also runs The FishChoice Current newsletter and supports the organization's communications initiatives. Margaret worked on various marine conservation projects prior to joining FishChoice, including a queen conch population study in the Bahamas for the Cape Eleuthera Institute and a vulnerability assessment of bivalves to ocean acidification for the United States Environmental Protection Agency. She was also a consultant for the Natural Resources Defense Council on an international marine mammal bycatch project and co-authored their Net Loss report. Margaret holds a Bachelor of Arts in Environmental Studies from the College of the Holy Cross and a Master of Environmental Management from Duke University. As a seafood lover, Margaret appreciates being a part of a sustainability organization working to ensure that current and future generations can continue to enjoy seafood.

Favorite ocean movie: Ponyo on the Cliff by the Sea

As the Data Analyst for FishChoice, Cynthia is responsible for managing and analyzing master data sets, developing reports, maintaining accuracy, and troubleshooting data issues. She has a background in behavioral decision research and originally started her career in the automotive industry before transitioning into marine conservation. After receiving her Master’s degree, she began working at the intersection of seafood, science, fisheries, and culinary applications with a collaborative team at NOAA Southwest Fisheries Science Center and Catalina Offshore Products in San Diego. Cynthia is also the Seafood Liaison co-chair on the Slow Food Urban San Diego board, strengthening her relationships with fishermen, seafood suppliers, scientists, and chefs. She holds a B.S. in Decision Science from Carnegie Mellon University and a M.A.S. in Marine Biodiversity & Conservation from Scripps Institution of Oceanography at UC San Diego. When she's not outdoors or in the water, Cynthia spends her time sewing and leatherworking. 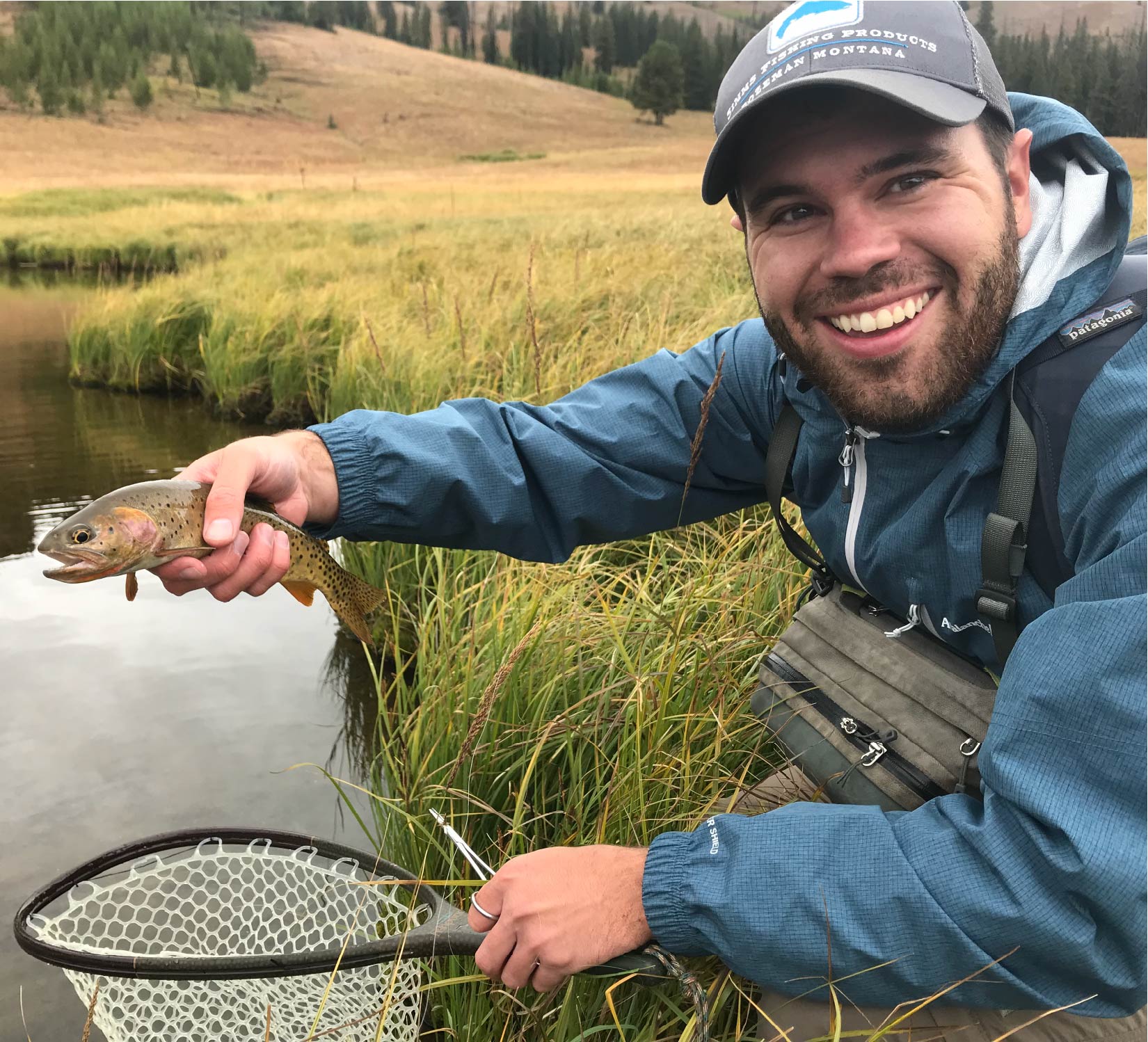 Tim is the FishChoice Manager for the organization where he designs, implements, and manages sustainability programs and initiatives for businesses and organizations worldwide. He also manages the FishChoice Partner program helping businesses to achieve their sustainability goals and is responsible for forming strategic partnerships with the leading sustainable seafood rating, certification, and advocacy groups. Before joining FishChoice, Tim was a Project Associate and Fellow at Meridian Institute where he gained extensive experience in national, regional, and state-level ocean, coastal, and watershed policy initiatives. He has also worked at Mote Marine Laboratory in Sarasota, Florida, where he worked in sustainable aquaculture and fisheries stock enhancement and as a research assistant at James Cook University’s Fishing and Fisheries Research Centre in Townsville, Australia. Tim graduated magna cum laude from the University of Colorado with a B.A. in Environmental Studies where he specialized in natural resource and environmental policy. Being generally obsessed with fish (he thinks about them most of the day), Tim enjoys working at the intersection between business, NGOs, and government to ensure that fish populations and our oceans are sustainably managed.

Favorite ocean activity: Surfing! And quoting Point Break (the original) while doing so.

Jeremy ensures that the information on FisheryProgress is consistent, accurate, and credible. He works with the implementers of Fishery Improvement Projects to share their status and progress with potential buyers, so that buyers can make informed seafood sourcing choices. Jeremy has 10 years of experience in marine science and conservation, with specialized experience in fisheries management, strategy development, and data analysis. He holds a Master’s degree in Coastal Marine Resource Management from the Bren School of Environmental Science & Management at the University of California at Santa Barbara.

Kristin leads FisheryProgress.org, FishChoice’s fishery improvement project (FIP) tracking website, and works to increase industry adoption of the site globally, builds key partner relationships and fosters new innovations for the site. She also supports strategic planning, impact tracking and funder relationships for FishChoice more broadly. Kristin has more than 20 years of experience in international marine and coastal conservation, and before joining FishChoice, she ran the Conservation Partnership Initiative for The Nature Conservancy, where she created in-person and online training programs supporting the development of smart, sustainable partnerships. Prior to that, for six years, Kristin was a Program Officer for the David and Lucile Packard Foundation’s Conservation & Science Program, and earlier in her career, she worked with IUCN’s marine program in Washington, DC. She spent a number of years living and working in Central America and in the Central and Western Pacific where she really began to understand the need for conservation efforts that support the livelihoods of people and communities. Kristin holds a Bachelor’s degree in Biology from Virginia Tech and a Master’s degree in Environmental Resource Management from James Cook University in Australia. Kristin lives in Fort Collins, CO and has a husband and two young daughters that are also avid fish-spotters.

Mary is the acting Operations Manager and Designer at FishChoice, working to ensure the non-profit runs smoothly on a day-to-day basis, while also designing graphics for FishChoice’s platforms and resources. Prior to joining Fishchoice in 2015, Mary worked as the Digital Content Manager for the City of Boston, creating content and constituent communications, and managing edits for its award-winning website Boston.gov. It was during this time that she became interested in sustainable food issues while assisting on projects for the Office of Food Initiatives. In addition to working in government technology, Mary spent the six years before that working with the Boston Election Department, helping to organize local elections as well as manage marketing campaigns to increase voter participation. Mary graduated with a B.A. in International Relations from Suffolk University in Boston, Massachusetts.