A good supply of live half-shell oysters and oyster meat is available year-round. Oysters should be bought live and smell like the sea, not sulfurous. Check for freshness by tapping on the shells to see whether they close. The meat from oysters grown off the bottom in farms tends to be higher, making it a good substitute for dredged oysters. Oysters can be kept up to two weeks after collection at 36–38F in a breathable container. Buyers should look for the origin and collection date on a live-oyster shipment, which is required by law.  A variety of volume measures are used, so buyers recommend insisting on easily quantifiable units such as by the piece or by the pound. Usually, Olympia oysters cost the most, followed by European, Kumamotos, Pacific, and Eastern. Based on 2013 sales figures, the sales of wild Eastern oysters was slightly double that of farmed Eastern oysters and the total of farmed Eastern and Pacific Oysters was slightly more than total sales of wild Eastern oysters. 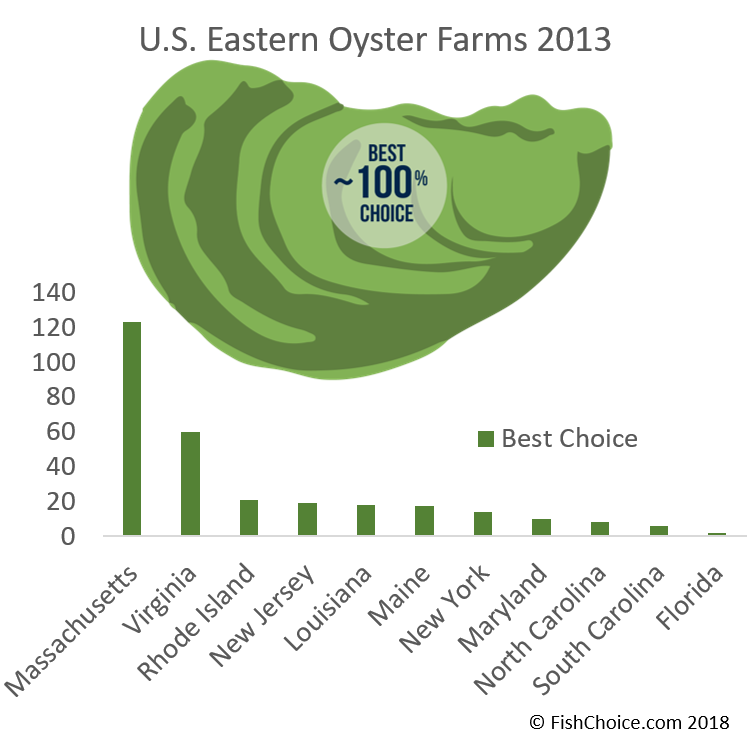 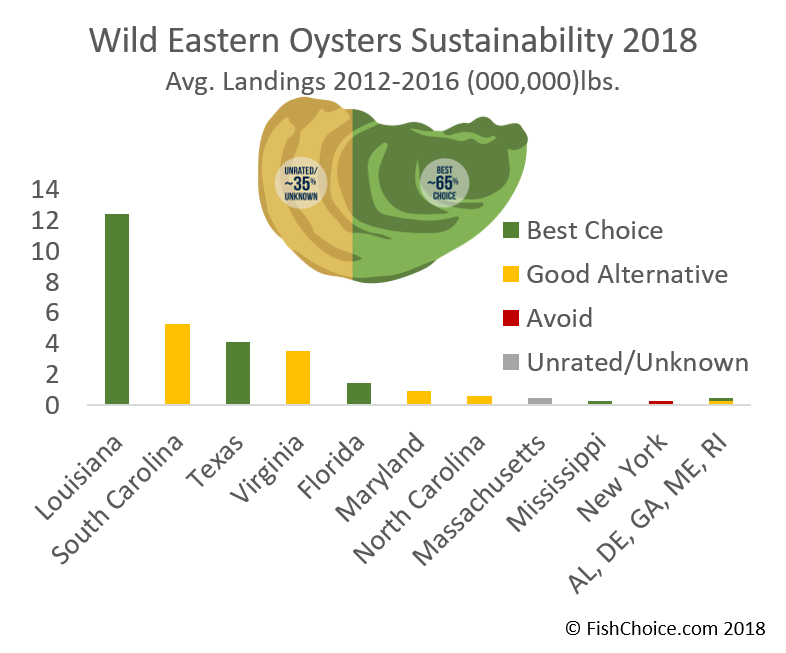 Key sustainability notes for wild-caught U.S. Eastern oysters based on landings from 2012-2016 and based on current 2018 Seafood Watch ratings:

Eastern oysters are bivalve mollusks with smooth-edged, oval-shaped shells. Like a variety of other shellfish, they have a two-part hinged shell. The shell has a “cupped” shape, and is white or off-white to brownish in color on the outside and white on the inside, with a purple muscle scar. The shell can have multiple ridges or bumps.

Eastern oysters have fast growth rates and on average, reach up to 8 inches (20 cm) in length. This species of oyster also has high reproduction rates. Eastern oysters reach sexual maturity around seven weeks after hatching and spawn during warm weather. They first mature and reproduce as males, but then later develop as females. Each female oyster has the ability to produce up to 100 million eggs during spawning events, but only about one percent of fertilized eggs move on to the next life cycle stage.

Hours after eggs are fertilized, the larva develop a shell and begin to move on their own. They will find a suitable place to attach themselves, usually on a hard substrate. Eastern oysters are sessile, meaning that once they settle, they will stay in one place for the entirety of their lives. A filter feeder, Eastern oysters eat by filtering plankton and algae from the water using their gills. Oysters have a variety of predators ranging from birds and crabs to anemones, sea stars, and sea nettles. The lifespan of an Eastern oyster varies based on freshwater inflow and predators.

Eastern oysters occur naturally from the Gulf of St. Lawrence, Canada, down the Eastern Seaboard of the United States, to the Gulf of Mexico and Caribbean Islands, to the coasts of Brazil and Argentina. They have been introduced to the US West Coast and Hawaiian Islands, British Columbia, Japan, Fiji, the Indian Ocean, as well as other locations. Eastern oysters are found in estuaries as well as intertidal and subtidal zones where they are sessile. They prefer to attach themselves to hard, rocky surfaces in shallow and sheltered salty and brackish waters. Eastern oyster larvae often attach themselves to the shells of adult oysters, where they will grow together to form large oyster reefs. Oyster reefs provide a suite of ecosystem services such as: providing habitat and protection to other species; minimizing storm surges; stabilizing coastal sediment; improving water quality; and, removing excess nutrients and organic matter from the environment. Eastern oysters can tolerate a higher salinity as compared to other oyster species. Their preferred salinity is 16 to 27 parts per thousand (ppt), but adults can tolerate salinities up to 35 ppt. Spat will not settle in areas less than six ppt. Eastern oysters are generally found in depths ranging from eight to 35 feet (2.4 to 10.6 meters) deep and prefer temperatures between 28° and 90° Fahrenheit (-2.2° and 32.2° Celsius).

The Milford Laboratory at the Northeast Fisheries Science Center (NEFSC) is focusing on ways to enhance growth and survival of shellfish in hatchery settings. NEFSC is using technological advances to study how improvements can be made hatchery operations, while decreasing impacts on the environment at the same time. The center is also trialing certain dietary supplements to see if they can alleviate responses to common stressors in hatcheries.

Numerous local, state, and federal agencies are involved to some degree in the permitting process and regulation of Eastern oyster aquaculture in the United States. While there is no national oversight agency for aquaculture in the US, there are extensive regulations in place regarding predator controls, therapeutant use, and disease management. Permitting varies by location with numerous federal agencies providing some degree of oversight. These include:

Additionally, the National Oceanic and Atmospheric Administration (NOAA), the US Coast Guard, the Bureau of Ocean Energy Management (BOEM), and the US Army Corps of Engineers are involved in the permitting and management of Eastern oyster aquaculture. Amongst regulations shellfish farms must adhere to include the Magnuson Stevens Fishery Conservation and Management Act, the Endangered Species Act, the Clean Water Act, and the National Environmental Policy Act.

Eastern oysters occupy shallow, tidal waters close to shore – placing them almost exclusively within the jurisdiction of individual state governments in the U.S. Gulf of Mexico. While each Gulf state has somewhat different management measures, all incorporate some form of size limits, fishing seasons, and gear restrictions. Additionally, all Gulf states have programs to move seed oysters (as needed) and to return cultch to oyster beds. Gulf states also enact area restrictions that are off-limits to commercial harvest – usually in part due to water quality concerns or as part of larger efforts to maintain broodstock and reef habitat as well as to reseed adjacent areas. Management also includes regulations controlling harvest totals, efforts, and access; however, no Gulf state has a total allowable catch limit. Florida is the only Gulf state that has a standard threshold for evaluating whether or not an oyster reef can support current fishing pressure. If a reef’s capacity falls under 100 bags of three-inch oysters per acre, the reef is considered depleted whereas if counts are between 100 and 400 bags per acre, the reef can support limited harvesting. Counts over 400 mean the reef is healthy. All states conduct active on-water and dock patrolling activities to enforce management measures.

While eastern oysters in the US Gulf of Mexico are not federally managed, there are mechanisms that link individual Gulf state management programs. The Interjurisdictional Fisheries Act (IJF) establishes and finances programs for information sharing as well as activities that support management of US multijurisdictional fisheries. As part of the IJF, the Gulf States Marine Fisheries Commission developed an oyster fishery management plan (FMP) in 1991, which was recently updated in 2012. The FMP is a coordinated effort to address disease control, shell movement, region-wide management recommendations, and provides best practices for states to utilize. The FMP also calls for the consideration of modeling tools to allow for region-wide biomass assessments for oysters that are currently lacking.

If in-shore activities require consultation with a federal agency under Section 404 of the Clean Water Act or Section 10 of the Rivers and Harbors Act, the US Army Corps of Engineers, the National Marine Fisheries Service, or the US Fish and Wildlife Service may be called in to provide resource protection recommendations. As oysters are generally consumed raw, numerous local, state, and/or federal health agencies may be involved in management to ensure that harvest areas are growing oysters that are safe for human consumption.

Management regulations are similar along the US East Coast wherein each state is responsible for managing their own eastern oyster fisheries. Every state employs measures such size-limit regulations, seasonal and area closures, gear restrictions, and on-water and dock enforcement. Managers in all states have implemented regulations to help wild populations recover from historic overharvesting by controlling harvest limits and by initiating recovery and restoration initiatives; including programs to provide oyster substrate and to rotate harvest areas. These restorative efforts are often led by state agencies or by NGOs and academic institutions. States share research and harvest information, but there are currently no statewide or regional biomass estimates of eastern oyster populations. No state currently has a total allowable catch limit.

The Department of Fisheries and Oceans Canada (DFO) manages the eastern oyster fishery at the federal level in Canada while the governments of New Brunswick, Prince Edward Island, and Nova Scotia manage oysters at the provincial level. The Canadian eastern oyster fishery is managed under the Integrated Fishery Management Plan for American Oyster in the Southern Gulf of St. Lawrence. There is currently no commercial catch limit for this fishery; however, management measures include limits on commercial licenses, minimum size limits (three inches), fishing seasons, and area restrictions. There are also gear restrictions as the only permissible harvest methods for wild oysters are rakes and tongs that must be operated by hand. DFO, Environment Canada, and the Canadian Food Inspection Agency co-manage the Canadian Shellfish Sanitation Program that regulates shellfish harvesting areas, processing, and distribution to ensure that oysters are safe for human consumption. DFO’s Conservation and Protection program is responsible for sustainability and compliance of the oyster fishery. Additionally, fishery officers in Canada conduct land and sea patrols to monitor catch, gears, and licenses. Officers also conduct aerial monitoring to ensure seasonal and area closures are being adhered to.

Eastern oysters are primarily found in the U.S., Mexico, and Canada. Factors such as overfishing, disease, and habitat loss have caused Eastern oyster stocks to decline to about 1% of their historical levels. Disease has had a significant impact on the oyster population in the Chesapeake Bay.

Bottom dredging used to collect Eastern oysters can kill non-targeted species. Since a number of organisms tend to attach themselves to oysters, including several mussels species, they tend to be the primary oyster bycatch, according to the U.S. National Marine Fisheries Service.

In Canada, oyster fishing is subject to seasonal and gear restrictions. Some Mexican oyster beds are controlled by fishermen’s’ cooperatives. The Eastern oyster is managed at the state and municipal level in the U.S. and regulations vary. The Chesapeake Bay oyster fishery is both public and leased, meaning certain areas can be leased for harvesting. Any that aren’t closed as reserves or due to safety concerns are available to the public. State agencies set regulations that govern the area, including gear restrictions, seasonal limits, time limits, and catch limits.

The regulations governing oyster farming in developed countries and some developing ones are strict and include best management practices. According to the Monterey Bay Aquarium, farming industry practices tend to be more stringent than the laws that apply to growing shellfish.

Oysters filter water, cleaning it so in some places oyster farming improves the habitat, although this is not universal.

Oysters farmed using on-bottom and suspension techniques have minimal impacts on the marine environment. Tongs with long handles and rake-like ends are commonly used to gather these oysters. The dredging of cultured oysters has less of an impact on the seafloor than dredging wild oysters because it’s restricted to relatively small areas. Farmers drag a metal basket containing a row of spiky teeth along the plot to uproot the oysters, causing them to fall into the basket. This dredging carries a moderate risk to marine habitats.

Farmed oysters don’t require feed so there is no loss of wild fish, and they require little or no drugs or chemicals.

Oyster farming has little risk of escapees because they aren’t capable of movement as adults. While some cultured oysters could reproduce in the wild, shellfish producers have stricter management codes than the laws that apply to the industry. The introduction of non-native oyster species to some areas, there have been some negative interactions with wild stocks. Risk of disease transfer is considered moderate because isolating oyster diseases can be very challenging.