Grouper is considered a good source of vitamin B6, vitamin B12, phosphorus, potassium, and selenium. The fish has firm, lean flesh and a mild flavor. Grouper is available year-round with peak catches in the Atlantic and Gulf of Mexico occurring during the summer and fall. Grouper is sold fresh and frozen as whole fish, fillets, and steaks. It is sometimes sold as “sea bass,” “mero” or the Hawaiian name “hapu’u”. 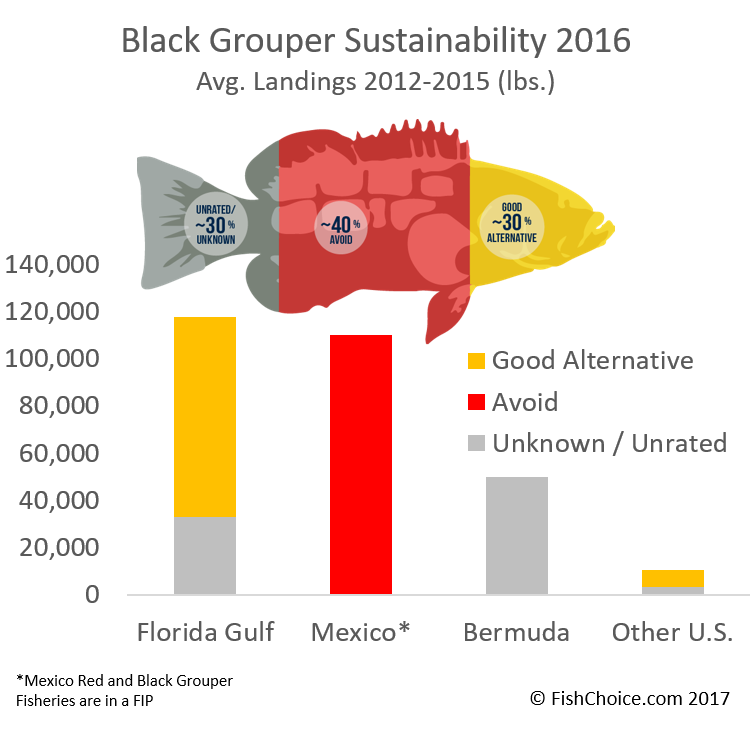 Black grouper grow up to five feet long and can weigh up to 180 pounds. They can live up to 30 years old, although most are harvested before reaching that age, usually at two feet in length or four to five years old. They are protogynous hermaphrodites, meaning they begin life as a female and some change into males as they grow – usually between two and four feet in length or 11 and 14 years old. The overall sex ratio is generally one male for every four females. Black grouper are solitary fish until spawning season, which is usually from May through August, where they aggregate and spawn in huge numbers. This phenomenon is known by local fishermen as the correção. Eggs are pelagic and fertilized externally, and float with the currents.

Young black grouper feed on crustaceans, mostly shrimp. Adults feed on other fish and squid. They have large, powerful jaws that they use to ambush their prey. Black grouper do not have teeth, and instead use their mouth and gills to suck up their prey. They also have teeth plates inside their throat that prevent prey from escaping after being swallowed. Black grouper take advantage of other species’ reproductive aggregations for feeding. Sharks prey upon large black grouper, while other grouper and moray eels prey upon smaller ones.

Black grouper are found in the western Atlantic Ocean with ranges extending from Massachusetts to Brazil. They are particularly associated with the southern Gulf of Mexico, Florida Keys, Cuba, the Bahamas, and throughout the Caribbean. The US stock primarily occurs in the Florida Keys – with a large proportion of the US stock protected by the Florida Keys National Marine Sanctuary’s Tortugas Ecological Reserves and Dry Tortugas National Park’s Research Natural Area in which all fishing is prohibited. Occurrences of the species north of Carolinas are considered to be rare and most likely due to larval transport in the Gulf Stream rather than migration. Adults are subsequently not reported further north of the Carolinas. Juveniles can occur in seagrass and oyster rubble habitat in the Carolinas, and along reefs in the Florida Keys and in Brazil. Adults prefer rocky bottoms, drop-off walls and ledges, caves, crevices, and coral and artificial reefs. While they are relatively sedentary and can remain in one particular site for some time, black grouper move to progressively deeper waters as they age. They are found inshore up to depths of 656 feet (200 meters). Adults are solitary, but in some instances form small groups. Adults make seasonal migrations to spawning sites where they form large spawning aggregations.

A 2015 study done by the National Marine Fisheries Services and the Mote Marine Laboratory looked at one of the spawning aggregation sites of black and red grouper, and red hind. They used passive acoustic recorders to monitor sound production indicative of spawning habitat use by groupers at Riley’s Hump in the Tortugas South Ecological Reserve in Florida, the first known US spawning site for black grouper. Sound production is common among many fish during courtship and spawning, and is species-specific. The results of this study were consistent with a previous study documenting reproductive behavior at spawning sites and sound production. This study illustrated the importance of the Tortugas South Ecological Reserve and called for continued research in order to understand its role in the recovery and sustainability of managed fish populations. Because of the vulnerability to overfishing associated with large aggregations and the biodiversity therein, it is important to consider spawning locations in the establishment of marine protected areas and seasonal closures.

In the US, black grouper are managed as a combined Gulf of Mexico/South Atlantic stock, though they are still managed regionally – with each region establishing its own catch level and management measures.

NOAA Fisheries and the South Atlantic Fishery Management Council manage the black grouper fishery along the US Atlantic. Black grouper are managed under the Snapper-Grouper Fishery Management Plan (FMP) along with over 50 other South Atlantic species including other groupers, snappers, jacks, and tilefish. Implemented in 1983, the Snapper-Grouper FMP was established to end historic overfishing of black, red, and other grouper species. The plan and its amendments include numerous measures to rebuild current populations. Among management measures included in the plan are:

NOAA Fisheries and the Gulf of Mexico Fishery Management Council manage the black grouper fishery in the US Gulf of Mexico under the Reef Fish Fishery Management Plan (FMP). US commercial production of grouper is dominated by the Gulf Coast – largely due to the high landings of red grouper in the Gulf. Established in 1984, the Reef Fish FMP and its amendments were designed to end historic overfishing for shallow water groupers and to rebuild populations. The plan covers black and other grouper species as well as more than 20 other species including snappers, tilefish, and jacks. The FMP and its amendments:

The FMP also institutes a permit system in which commercial vessels must have a reef fish permit and an individual fishing quota (IFQ) to harvest black grouper in the Gulf of Mexico. The IFQ program allocates shares of the total commercial catch limit amongst individual fishers. Under the program, each fisher owns a share of the quota and can chose to fish it at anytime during the open season. Strict commercial reporting requirements prevent fishers from harvesting more than their individual allocation.

Red and black grouper are among the most important species caught in Mexico in terms of volume and economic value. Most grouper, particularly those caught in the Mexican industrial bottom longline fishery, is imported to the US. Numerous entities are involved to some degree with creating, implementing, and enforcing fishery management strategies in Mexico. The Secretariat of Agriculture, Livestock, Rural Development, Fisheries and Food (SAGARPA) is the entity that promotes policy to improve production practices in fisheries. Under SAGARPA, the National Aquaculture and Fishing Commission (CONAPESCA) is charged with developing and carrying out fisheries management regulations. The technical branch of CONAPESCA is the National Fisheries Institute (INAPESCA) that provides technical support and management recommendations. Enforcement of regulations can involve different federal and state agencies including the Mexican Navy, federal and state police, and CONAPESCA.

Black grouper are fished in Mexico by a bottom longline industrial fleet (which primarily imports to the US market) and an artisanal fleet (which primarily supplies to domestic, Mexican markets). Among current management measures in place include permits (either for the industrial or artisanal fishery), minimum size limits, an annual off-season from February 15 to March 15 for the whole fishery, and gear restrictions. Additionally, all vessels in the industrial fleet are monitored by a satellite vessel monitoring system (VMS); however, this only applies to the industrial fleet and does not currently apply to artisanal vessels. Despite current measures, the stock is considered overfished. There are no quotas or limits for grouper species as the fishery is managed via permits. Additionally, there have been implementation and enforcement issues. Managers have identified that the fishery needs significant improvement and in 2014 a new fishery management plan was approved to address declining stocks and which includes stricter management regulations, but the plan has yet to be implemented and most of these new regulations are not in place.

Black grouper are found in the Atlantic from Massachusetts to Brazil, including the Gulf of Mexico. Black grouper are found at shallower depths than other groupers. Unlike red grouper, black grouper in the United States is considered to be one stock across both the South Atlantic and Gulf of Mexico regions. Grouper in generally are fairly long-lived and come together to spawn in large numbers, characteristics that make them vulnerable to fishing pressure. A May 2014 Seafood Watch report stated that according to the most recent stock assessment in 2010, black grouper is not considered overfished.

Grouper are caught with hook-and-line gear, including handlines and bottom longline gear, as well as some traps, pots and cast nets. Reef fish and sea turtles risk getting caught in this gear, although there are restrictions in place that limit where the gear can be used. Bottom longline gear can have moderate impacts on the seafloor while handlines have low ecosystem impacts, according to the Monterey Bay Aquarium.

In the United States, black grouper is considered one stock but managed regionally under separate fishery management plans in the Gulf of Mexico and the South Atlantic. Management measures include permits, annual catch limits, fishing quotas, marine protected areas that are closed to fishing, seasonal closures, gear restrictions, minimum size limits, and data reporting requirements. Management in the Gulf of Mexico received a better score than the South Atlantic from the Monterey Bay Aquarium’s 2014 Seafood Watch report because that area has observer programs, which are lacking in the Atlantic. Overall the report called U.S. black grouper management moderately effective.