Buyers consider Arctic char a good substitute for farm-raised salmon because it has a more delicate texture and clean, mild flavor. Farmed Arctic char are sold fresh whole, and fresh or frozen as boneless fillets with the skin off or on, and canned. Farmed char has redder skin than wild char (more silver skinned) and cream-colored spots, however, Arctic char farmers add a synthetic pigment to the feed to give the fish a consistent pink-orange color. The high fat content in Arctic char makes it well-suited for dry-heat cooking such as broiling and smoking. Arctic char tends to be considered of very high quality and not widely available making it expensive. 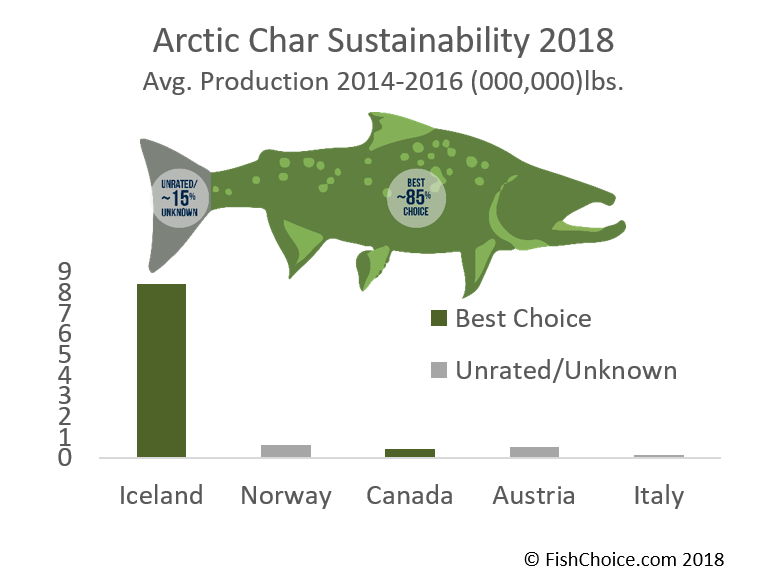 Key sustainability sourcing notes for Arctic char based on landings from 2014-2016 and the most recent 2014 (Canada, Iceland, U.S.) Seafood Watch assessments:

Arctic char can be either anadromous – living in the ocean and spawning in freshwater streams – or populations can be landlocked and remain in fresh water their whole life.  They closely resemble salmon in appearance, but are closer genetically to lake trout. Their color depends on the time of year and environmental conditions of their habitat, ranging from pale pink or silver to bright red. Farmed char have skin that is red with cream-colored spots whereas wild char has more silver-colored skin. Optimal temperature for aquaculture practices is found to be around 54 degrees Fahrenheit (12 degrees Celsius), as this supports high growth rates, good feed utilization, a reduced risk of contracting diseases, and low fungus growth compared to higher temperature studies. Arctic char can tolerate high population densities without negative effects on feed intake or growth. The species thrives best in cold, clear, oxygen-rich water, and the entire production cycle can take place in a solely freshwater environment, although some farms choose to give populations a saltwater period.

Spawning occurs from September to November. During this season, males develop a hooked jaw and turn bright red, whereas females remain silver. Most males defend territories and mate with several females. The females dig nests, known as redds, where they deposit 3,000 to 5,000 eggs at a time. Char do not die after spawning like salmon, and often spawn every third to fourth year. Adults remain in the river for one to three years before returning to sea and young char remain for five to seven months, although some may remain for one to nine years. The use of temperature and light manipulation has enabled modified aquaculture spawning. Arctic char remain in the hatchery until they weigh 5-100g, and reach market size 15 to 30 months after hatching.

Char diet varies with season. In the late spring and summer, they eat aquatic insects, salmon eggs, snails, and small crustaceans and fish. During the autumn and winter months, char feed on zooplankton, freshwater shrimp, and small fish. In many cases, during the winter, char live off of the fat they accumulate in the summer. Larger char, found in late summer or fall, have more oil, and hence more flavor.

Arctic char are native to northern streams, rivers, lakes, and subarctic coastal waters in North America, Asia, Europe, Iceland, and Greenland. They have the northernmost distribution of any freshwater fish. There are two subgroups within Arctic char – one, anadromous (or sea run) and the other, freshwater (or landlocked). Anadromous char move downstream to the sea in the spring where they will feed in coastal waters in the summer months. In the fall, with the onset of sea ice growth, anadromous char will return to freshwater to spawn. They will remain in freshwater throughout the winter months. Spawning occurs from September to October, over gravel beds. Males return to spawning grounds first and will establish and defend territories from rival males. Females dig gravel nests or “redds” in waters between nine and 19 feet (three to six meters) deep in which they will deposit their eggs. Eggs incubate under the ice for about six months – with the fry later emerging from their gravel nests in mid-July. Freshwater or landlocked char will spend their entire lives in freshwater. Arctic char can be found in waters up to 230 feet (70 meters) deep, but most are found in very shallow waters less than three feet (one meter) deep and in water temperatures from 39 to 60 degrees Fahrenheit (four to 16 degrees Celsius).

Arctic char farming facilities exist in the United Kingdom, Ireland, Norway, Sweden, Austria and Italy but the majority of the fish comes from Iceland, Canada, and the United States. In Iceland, industry and production statistics come from government or independently verifiable sources but there are little data in English about ecosystem and farm effluent discharge, according to a recent Seafood Watch report. In the United States and Canada, where the industry is smaller, production and industry statistics are lacking. Seafood Watch gave the U.S., Canada, and Iceland moderate ratings overall for data availability.

Land-based Arctic char farming generally takes place in closed, recirculating systems that treat their water so there is a low risk of pollution and negative effects on native habitats. In Iceland, flow-through farms send freshwater effluent into coastal areas that have high currents, preventing waste from accumulating, according to the Monterey Bay Aquarium. In Sweden, Arctic char operations are intentionally located in freshwater reservoirs that are depleted and unproductive because the discharges increase the amount of nutrients in the water, providing a beneficial effect. A Seafood Watch report found that Arctic char aquaculture in Iceland, Canada, and the United States has a minimal impact on habitats there.

Since Arctic char is a carnivorous fish, it has a high dietary protein requirement. Some farmers feed Arctic char fish meal and fish oil from wild-caught fish, which may put pressure on those populations. Feed formulations are often proprietary, making them difficult for outside scientists to assess, according to the Monterey Bay Aquarium. A recent Seafood Watch report gave Arctic char farming in Iceland, Canada, and the United States a moderate score for feed because it relies on crops that humans eat.

Arctic char has a complex genetic makeup that makes it challenging for farmers to selectively breed char with favorable characteristics. However, the fish are suited to growing in smaller, densely stocked habitats. Disease transmission risk is very low in Arctic char aquaculture due to careful management. The species has a low need for chemical use or treatments over multiple production cycles, according to a Seafood Watch report.

In the United States and Canada, Arctic char farms employ partial recirculation and water treatment technology, screens, and secondary capture devices to prevent fish from escaping, according to the Monterey Bay Aquarium. Any that do escape are unlikely to survive, making the risk to wild populations quite low. While some farms in Norway and Sweden use net pens, Swedish facilities are set up in otherwise unproductive reservoirs. In Norway strict measures are in place to limit escapes. Icelandic flow-through systems have a moderate risk of escape into the open ocean, but double security barriers are used as a preventive measure. While strict regulations are in place for live animals, Seafood Watch found there is a small potential for unintentionally introduced species to escape.

Operations are primarily land-based and either use recirculating tank systems that treat and reuse wastewater or flow-through systems. With recirculating tank systems, the water quality is closely controlled. There have been increased nutrients found near some flow-through systems discharging freshwater effluent into coastal waterways but the overall concern over effluent impact is low, according to a recent Seafood Watch report.

All Arctic char aquaculture stock is produced in hatcheries from captive broodstock, making the industry independent from wild stocks for sourcing, the Monterey Bay Aquarium reported.