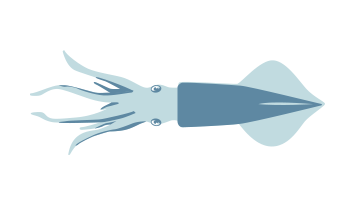 Longfin squid is available year-round and usually gutted and cleaned with or without tentacles. The edible parts of the squid include the tentacles, the mantle (tube), and the fins (wings). Fresh longfin squid should be ivory colored with light speckles on the membrane. The flesh shouldn't be slimy or have a pink, purple, or yellow color. Avoid purchasing longfin squid with a fishy smell. Cheaper Illex (shortfin) squid can sometimes be sold as longfin squid but can be distinquished by a rougher flesh and generally larger size.

Longfin squid are characterized by their long fins that are at least half the length of their mantles (the main part of the body above the head). They are usually pink or orange and mottled with brown or purple and can change their skin color and pattern at will to hide or escape from predators, help them hunt, and to communicate and attract mates. Like most squid, they have large eyes that are covered by a cornea, which assist in hunting. Despite their good eyesight and ability to change color at will, longfin squid are thought to be colorblind. They are invertebrates and like other squid species do not have outer shells and instead have an internal shell called a “pen.”

Longfin squid grow and mature fast. They can grow up to 1.6 feet mantle length, but are generally less than a foot long. Males grow more quickly and tend to be larger than females. Longfin squid spawn year-round with peak production occurring in the summer and winter months. Females lay fertilized egg capsules – containing about 150 to 200 eggs in each cluster on the ocean bottom. A female will lay between 3,000 to 6,000 eggs in her lifetime. Eggs generally hatch between 11 and 26 days after fertilization depending on the surrounding water temperature. Longfin squid have a relatively short lifespan and usually only live to be between six and eight months old. Their growth is correlative to the surrounding water temperatures – with those hatching in the summer growing at a faster rate than those in the winter. Longfin squid reproduce right before they die, and given their relatively short lifespan, the entire population will replace itself every six months or so.

Longfin squid are found from Newfoundland, Canada to the Gulf of Venezuela in the Caribbean Sea. Along the Atlantic Coast of the United States, they are most abundant and occur in commercial quantities from Southern Georges Bank to Cape Hatteras, North Carolina. Adult longfin squid live over mud, sand, or a mix of mud/sand substrates along the continental shelf and the upper continental shelf. Juveniles are found in the upper water column and larvae occur in surface waters. Squid eggs are attached to rocks, small boulders, vegetation, or the seafloor. Adults and juveniles exhibit a daily vertical migration – remaining near the seabed throughout the day and moving higher in the water column towards the ocean surface at night. They can be found in waters as deep as 1312 feet (400 meters) and prefer water temperatures between 50 and 57 degrees Fahrenheit (10 and 14 degrees Celsius). Longfin squid migrate seasonally, north of Cape Hatteras, and will move offshore during late autumn and winter to warmer waters along the continental shelf and slope. During the spring and summer months, they will move inshore again.

Longfin squid are highly resilient to fishing pressure as they are fast growing, quick to mature, and as the entire population replaces itself every six months or so. Regular stock assessments are performed and biomass has generally fluctuated near or above target levels. According to a 2011 stock assessment, longfin squid are not overfished. As of 2017, there is not enough information to determine whether the stock is subject to overfishing.

The majority of longfin squid are harvested using small-mesh bottom trawls over sandy or muddy bottoms that tend to be less sensitive to the impacts of bottom trawling than other areas. While benthic biological structures will take time to recover from the impact of trawling, sandy bottoms can generally withstand two to three trawl passes a year without significantly adverse changes. These recovery rates are lower in muddy and structurally diverse habitats where trawling may cause long-lasting, if not permanent damage.

Small-mesh bottom trawls used to target longfin squid can incidentally catch marine mammals and large pelagics. Finfish such as butterfish, hake, herring, flukes, dogfish, and mackerel are known to be caught in the US Atlantic longfin squid fishery – with butterfish being the most commonly caught bycatch species. To address butterfish bycatch, fishery managers have implemented hard caps on the amount of butterfish that can be incidentally caught in the fishery. The longfin squid fishery has also experienced interactions with protected and threatened and endangered species such as small cetaceans and leatherback and loggerhead sea turtles. To prevent bycatch, fishers use measures such as gear restrictions. Additionally, educational outreach initiatives instruct fishers on actions to take in the event of marine mammal interactions. Fishers communicate in real-time to report marine mammal spottings and hotspots of marine mammal activity.

US management of the longfin squid fishery is considered to be effective as the fishery has maintained stock biomass and recruitment throughout the years. Management measures such as limited access, quotas and seasonal distributions of quotas (to spread out fishing effort), real-time closures, gear restrictions, and mandatory vessel trip reports have been successful at maintaining biomass levels – with current levels considered to be within historic norms. According to a 2013 Seafood Watch report, the fishery management plan could incorporate a more precautionary approach in the form of ecosystem-based management to better account for predation in stock assessments. Due to the high variability of the longfin squid stock due to natural factors, Seafood Watch has identified the need for more real-time assessment and monitoring.