Mid-October is the start of the Florida stone crab season (ending mid-May). A unique fishery, Florida stone crabs are harvested only for their claws and live crabs are returned to the water with claws regenerating in 1-2 years (varies based on size of crab and time of harvest relative to molting cycle). Florida stone crab meat is flaky and white to off-white with a sweet taste. Claws are either cooked right on crabbing boats or dockside, and are available either fresh or frozen. Claws should be cooked right after they are removed from the crab so the meat doesn’t get stuck to the shell. Approximately 2.5 lbs. of claws yield 1 lb. of meat. Stone crab have a shelf life of 3-5 days so they need to be sold quickly, which can make it challenging to ship out of state. Claws past their shelf life will have an ammonia smell and slippery shells. Meat with black discoloration is a sign of poor handling. Beware imposters: Stone crab from Florida is larger, smoother, and more orange than rougher-shelled, duller-colored Chilean and Mexican rock crab and these imported cooked claws from crabs that look similar to stone crab claws are available frozen. 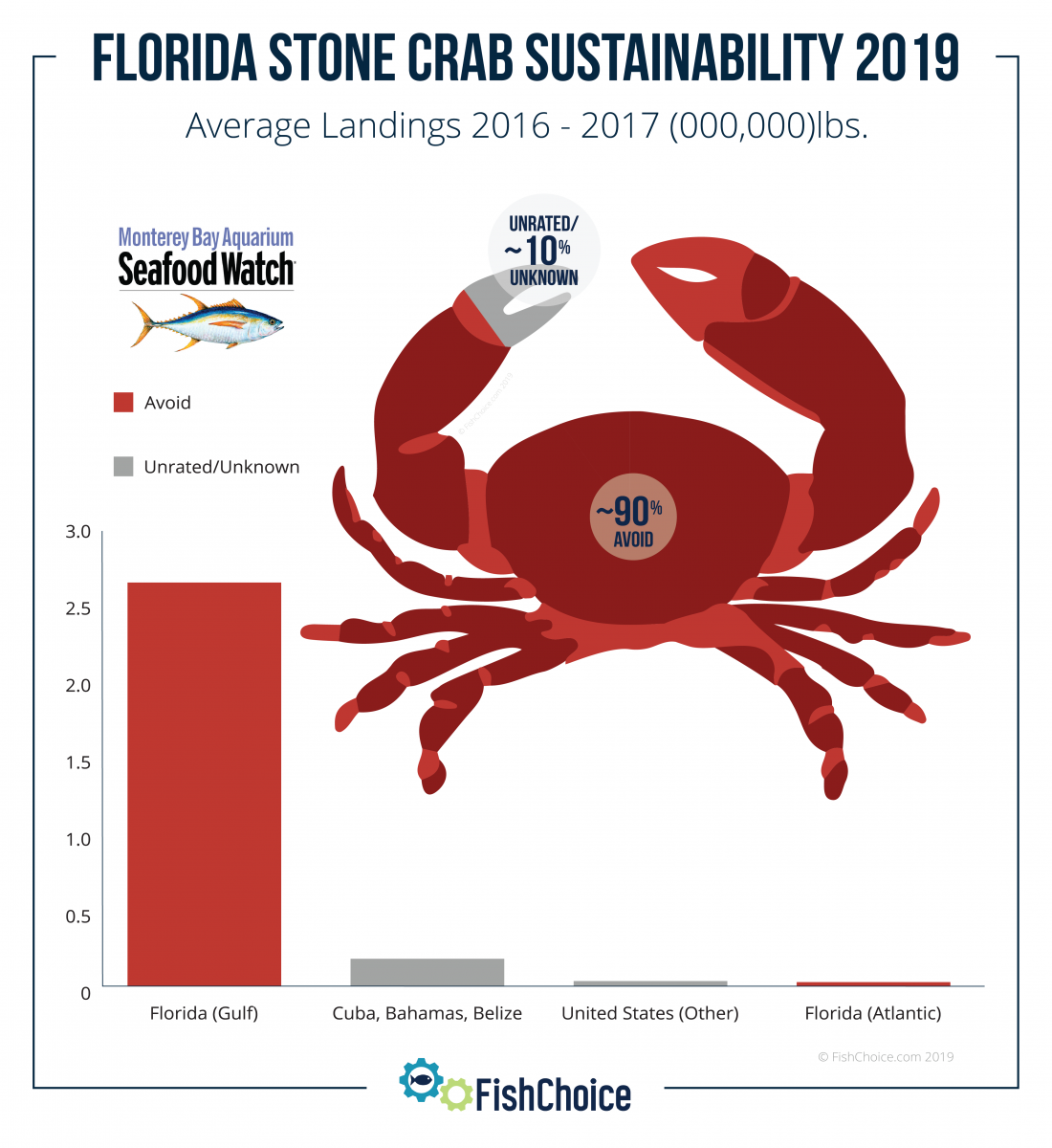 Females reach maturity at about two years old. Males wait until the female molts before they can mate, after which the male stays to protect the female for up to several days. Spawning season lasts from April through September. Females retain the sperm received until their next molt, up to a year later. Sperm is stored in two sacs over the winter, and used in the spring or summer for internal fertilization of the eggs, which are deposited on the female’s underside in a bright orange or red egg sac, called a sponge. Females carrying eggs are called ovigerous. They can lay up to one million eggs at a time, several times during a spawning season, which hatch within two weeks. The larvae undergo six stages of molting and development in four weeks before emerging as juveniles. Juveniles tend to be darker in color than adults.

Florida stone crabs can lose their limbs easily to escape from predators or maneuver through tight spaces. The limbs can grow back within a year, including their claws, with little loss of blood if the joint linking the claw to the body is left intact. Every time the crab molts, their claws grow larger. Molting only occurs at night or in dark spaces, due to the extreme vulnerability of the crab to predators during the molt.

Florida stone crabs are found from the west central part of Florida south to the Florida Keys and around the peninsula to Atlantic central Florida. They are also found in parts of South and North Carolina. The species often co-occurs with Gulf stone crabs (Menippe adina) in between this area along the Atlantic and in parts of the Florida Panhandle – even interbreeding and producing hybrids in these regions. Florida stone crab larvae are planktonic and inhabit nearshore coastal waters and estuaries. Juveniles inhabit hiding places such as crevices near or under rocks, shells, and sponges. Adult Florida stone crab live in burrows and can be found in seagrass beds, on mud and sand bottoms, and on or near rocky substrates. Adults inhabit both near and offshore habitats up to depths of 200 feet (61 meters). Little is known about the migration habits of stone crabs, but it is believed they move in response to environmental factors and seasons. Both males and females have been observed moving inshore during the fall to mate.

Stone crabs have extremely high reproductive rates, making them less vulnerable to fishing pressure. When stone crabs are caught, fishermen twist off a claw and the crab is returned to the sea. Each crab can regenerate a new claw up to four times in its lifetime. Regenerated claws are easily identifiable.

Population levels of stone crab are estimated to be high and overfishing isn’t occurring, according to the U.S. National Marine Fisheries Service. While a monitoring program was being established in 2004, there has remained a lack of authoritative, scientifically-based assessment of stone crab abundance.

The majority of stone crab come from Florida and are primarily caught using plastic or wooden traps. Some wire traps are used. Ghost traps are problematic for ocean habitat because the biodegradable panel takes months to a year to fully disintegrate, and the traps themselves can cover a natural marine substrate. Traps can also potentially damage coral reefs, seagrasses, and live hardbottom, according to the U.S. National Marine Fisheries Service.

Most of the bycatch in the fishery consists of nonlegal stone crabs that get released alive. Other bycatch includes mollusks, other crabs, and small finfish. Starting in 1979, the traps used to catch stone crab were required to have a biodegradable escape panel to reduce bycatch. Wire traps must have several unobstructed escape rings to prevent finfish bycatch.

According to the Monterey Bay Aquarium, stone crab fishermen and managers have created a plan to gradually reduce fishing efforts over the next 30 years to protect the population and maintain the fishery. Some institutions laud stone crab fishery management for trap design and gear control measures, seasonal closures, and minimum size restrictions on claws but note a lack of peer-reviewed scientific population assessments.