Market squid have eight arms and two tentacles, as well as a milky and purple iridescent coloring that can change depending on environmental factors. Squid is available year-round frozen, whole, or cleaned. It is also sold as frozen tubes, tentacles, and rings that are marketed breaded or unbreaded. Some buyers suggest looking for tender squid that’s ivory colored with white skin, which indicates higher quality. Improperly frozen squid will have a reddish tinge, and poor quality squid will smell like iodine or ammonia. California market squid is a good substitution for expensive shellfish like clams and shrimp. 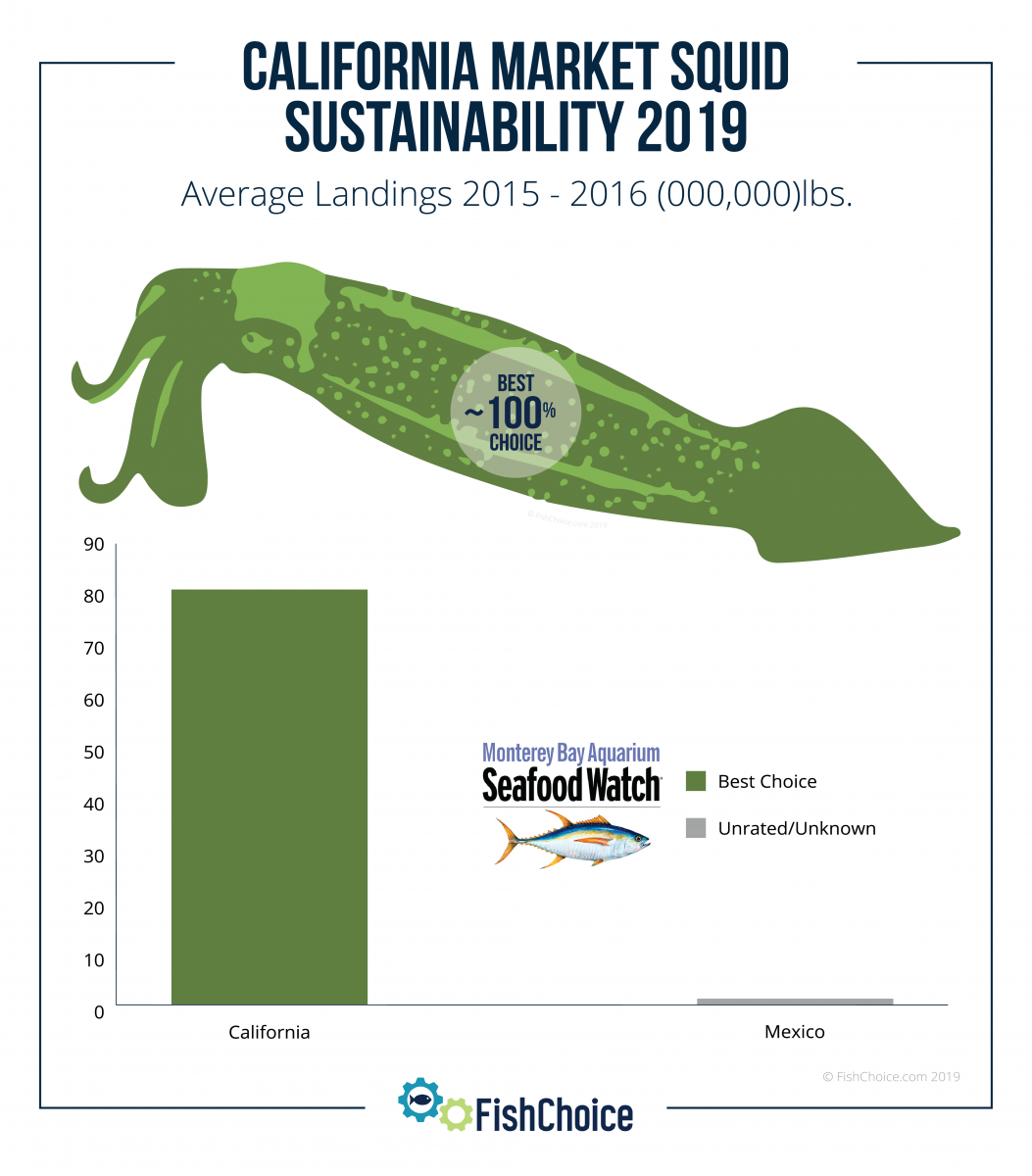 Key sustainability sourcing notes for California market squid based on global production from 2014-2016 and based on the most recent Seafood Watch assessments as of February, 2019:

California market squid are part of the mollusk family known as cephalopods (meaning “foot-on-head”). Their bodies are long and tapered, with a mantle that is not fused to their heads. Market squid swim backwards through the use of valves near their head. Market squid have eight arms and two tentacles with suckers that extend out from the ends of their bodies where their mouths are located. Their tentacles are used for mating and prey capture.

They have a mixed, iridescent coloration ranging from milky white and purple to mottled brown, but their coloring can change in response to a number of environmental factors. If feeling threatened, for example, a market squid can change to a dark red color and may release ink as a diversion to escape predators. California market squid can reach about a foot in length. They have short lifespans, normally only living for six to nine months. California market squid will die soon after spawning.

California market squid reach sexual maturity about six months after hatching and spawn year-round. During spawning periods, they will congregate in large schools, usually over sandy habitats. Males deposit spermatophores into females, and eggs are fertilized as females release them. Females will deposit the fertilized eggs on sandy habitats, building mounds of egg cases. Females will produce around 20 egg cases during spawning – each case containing 200 to 300 eggs. The time it takes for the eggs to hatch can depend on water temperature, but larval squid will usually hatch after three to five weeks. The newly-hatched larvae are referred to as “paralarvae” and look like miniature versions of adult market squids.

Juveniles will feed on small crustaceans and as they grow, they begin feeding on krill, small fish, and even other squid. California market squid are prey to a variety of fish (including salmon, lingcod, and rockfish), seabirds, and marine mammals.

California market squid range from southeastern Alaska to Punta Eugenia, Baja California Sur, Mexico. They are most abundant between Monterey Bay, California and Punta Eugenia and as such, nearly all market squid since 1986 have been caught and landed in California. California market squid are considered to be a nearshore species and are commonly found within 200 miles of shore. They occupy a range of depths from the ocean surface down to 2600 feet (792 meters) deep. During the day, market squid are found in deeper waters, but will make upward nightly migrations (within the upper 295 feet (90 meters) of the ocean surface) to feed. Adults will migrate to shallow waters to spawn, usually over sandy habitat that the eggs are then anchored to. Spawning may occur year-round in some areas. In Monterey, California mass spawning will occur in April to coincide with the upwelling season whereas in southern California, spawning will begin in November when conditions are ideal.

California market squid prefer and are most abundant in waters between 50 to 61 ̊ Fahrenheit (10 to 16 ̊ Celsius). The fishery itself is strongly impacted by environmental and atmospheric conditions of the California current. Market squid are very sensitive to warm water temperatures produced by El Niño with overall catches decreasing in El Niño periods. Landings generally rebound during cooler La Niña periods that bring increased upwelling.

California market squid is a fast-growing species that reproduces at a young age, making it resilient to fishing pressure. According to the U.S. National Marine Fisheries Service, the entire market squid population can replace itself annually.

This type of squid’s survival hinges on factors such as ocean temperature and the availability of prey so abundance varies widely and is sometimes unknown, according to the Monterey Bay Aquarium. Some institutions report that there are no statistically sound population estimates of this squid, but say that the species is not being overfished.

California market squid are caught with purse seine nets. This type of gear can cause some habitat damage as the purse seines may come into contact with the seafloor, according to the Monterey Bay Aquarium. However, some institutions suggest that generally squid fishermen avoid fishing over rocky bottoms and shallow waters to prevent damaging their nets so contact with the seafloor is limited. Squid are drawn to light, so fishing vessels work with "light boats" that are equipped with high-powered lights to attract squid. The high light levels were thought to have a negative effect on nesting seabirds in the Channel Islands.

Squid fishing entails the use of powerful lights to attract squid to the fishing boats, which then encircle schools of fish with nets so bycatch in this fishery is minimal, according to the National Marine Fisheries Service. The lights alone prevent accidental captures. The bycatch level in this fishery as unknown. Observed bycatch include sardines, mackerel, and anchovies. The Monterey Bay Aquarium notes that squid squid egg capsules are a bycatch issue and could have an effect on the population, making it a source of concern.

The California market squid fishery is managed by the California Department of Fish and Game. Monitoring and scientific research is conducted in cooperation with NOAA's National Marine Fisheries Service. Maximum sustainable yield is determined by monitoring landings and abundance indices. Management measures include a seasonal catch limit, time and seasonal closures, as well as a permit system, according to the U.S. National Marine Fisheries Service. However, a continuing lack of accurate stock estimates are cause for concerns about the fishery’s sustainability.