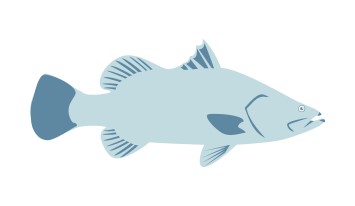 Barramundi (FDA common name 'giant perch') is native to Australia and regions of Southeast Asia. The fish comes from both wild fisheries and aquaculture production. The biggest supply of wild-caught barramundi comes from Indonesia, with fish reaching 5-10lbs. Because barramundi can reach a market size of 1.5- 2lbs. in less than a year, it is well-suited for aquaculture. Farmed barramundi is a cost-effective, sustainable alternative to grouper, snapper, and halibut that is available year round with the leading aquaculture producers based in Taiwan, Vietnam, Malaysia, and Thailand.

When uncooked, the flesh is pink and turns white when cooked. Barramundi has a sweet, buttery flavor and larger barramundi have a stronger taste profile than smaller fish. The dense meat has large, firm flakes and the fish has a few large bones that are removed easily. The fish's mid-oil content helps to keep the flesh moist while cooking, lending itself to a myriad of preparations. Many times the fish is prepared pan seared with the edible skin left to crisp-up nicely. Barramundi is most commonly available as fresh and frozen in fillets, as well as portions. Buyer Beware: Product quality can vary considerably based on the production system, environmental conditions, and harvest method and fish raised in freshwater can be subject to off-flavor, so discerning buyers may wish to avoid pond-raised product.

A part of the sea perch family, barramundi can grow up to seven feet (200 cm) in length and weigh up to 130 pounds (60kg). They are protandrous hermaphrodites, meaning they begin life as males and later turn into females, usually at three to five years old. They have a distinctly pointed head with a large jaw and rounded tail fin. Freshwater populations have a green-blue upper body with brown to black tail fins. Saltwater barramundi have a silver body with yellow tail fins. Based on aboriginal folktales, some say barramundi has special aphrodisiac qualities and is given the name “passion fish.”

Adults migrate from freshwater to coastal estuaries between October and April to spawn, which happens when tidal activities are strongest. Large females can produce up to 40 million eggs in one season; however, more than 90 percent of larvae and juveniles die within the first couple months. Larvae hatch after 24 hours, relying on nutrients from the yolk sac until they are more developed, about two or three days later. Larvae remain in mangrove and tidal habitats until the springtime. Juveniles migrate into rivers if there is one nearby, where they take three to four years to develop into adults. Adults reach sexual maturity between three and five years old, where they migrate back to the saltwater to spawn. Males turn into females at around six years old and three feet (80 cm) in length, requiring saltwater for the sex change.

Barramundi eat almost anything, including other barramundi, and can consume prey up to 60 percent its own length. Larvae eat plankton. Juveniles eat small fish, aquatic insects, and small crustaceans. Adults prey on fish and crustaceans. Predators of barramundi include large fish, birds, and reptiles such as saltwater crocodiles.

Barramundi are native to the Indo-Pacific and are widely distributed throughout the region – ranging from Australia, Indonesia, Papua New Guinea, northward to the coast of China and Japan, and westward to India and various islands in the Indian Ocean. They inhabit estuaries, lower reaches in rivers, and coastal waters. Barramundi prefer slow-moving rivers, creeks, swamps, and estuaries. They are also capable of tolerating a wide-range of salinities and environmental conditions and can often be found around nearshore islands and reefs. Barramundi are catadromous and migrate from fresh water to salt water to spawn and commonly move between the two throughout their life cycle.

A series of filters and pumps treat water in the recirculating aquaculture systems (RAS) used to farm barramundi, minimizing environmental impacts. Many RAS facilities either utilize previously existing buildings or are built on previously converted land which results in no further habitat conversion or loss of habitat functionality. According to Seafood Watch’s 2020 recirculating aquaculture systems report, RAS operations are considered to have relatively small physical footprints due to intensive production volumes. Floating net pens like the ones used to farm barramundi in Vietnam have little direct habitat impacts, according to Seafood Watch, but discharges can affect water quality and biodiversity.

The recirculating aquaculture systems used to farm barramundi rely on food that contains some animal ingredients, though there are ongoing improvements in aquaculture feeds and their efficiency. Seafood Watch gave this farming type a yellow score for feed in its most recent RAS report, noting that it does vary by species. According to its 2014 report, Seafood Watch notes that net pens used to farm barramundi in Vietnam pose a moderate conservation concern as there is moderate use of wild fish in feed, with a protein loss of 34%. The feed footprint is moderate as well and is estimated at about 11 hectares/ton.

If they are in a stressed environment, (i.e.extreme temperatures, poor handling, low dissolved oxygen, poor nutrition), Barramundi can experience bacterial, fungal, viral, and parasitic diseases. But according to Seafood Watch’s 2014 report on net pen farmed barramundi in Vietnam, operational data has shown a low incidence of diseases. The risk of disease amplification is low as well. Although diseases can occur in recirculating aquaculture systems, Seafood Watch reported little risk of transferring these diseases to wild fish as a result of the limited volumes of water discharged, and the ability to treat or control those discharges.

Escapes from recirculating aquaculture systems are highly unlikely given how many screens and filters the fish would have to pass through first, and the fact that they’re land-based also minimizes survival outside the building. Seafood Watch gives this farming type a green score for escapes. Net pen systems have an inherently moderate to high risk of escapes. The potential risk is mitigated in Vietnam through the use of tanks during certain production stages. According to Seafood Watch, there is a history of escape-free production and a low invasiveness score due to the use of local broodstock.

Recirculating aquaculture systems often use a variety of treatment systems for discharged effluent, Seafood Watch reported in 2020. RAS operations that capture solids and have waste treatment systems in place are not considered to cause or contribute to cumulative ecological impacts at a waterbody/regional scale while those that don’t can potentially have impacts on that scale. Net pen operations in Vietnam actively monitor potential impacts and, according to Seafood Watch, major impacts from effluents beyond the farm sites are considered unlikely to happen. Seafood Watch did note that as more data became available, this criterion should continue to be monitored carefully.

Barramundi are hardy, fast-growing, and have a high reproductive rate, making them ideal for aquaculture. In Vietnam, net pen farms culture native species of barramundi, using domesticated broodstock that have low escape numbers. Fingerlings are also hatchery-raised. Seafood Watch also noted in its report that any future collections of wild brood fish would occur at levels that would not impact wild populations. Most recirculating aquaculture systems around the world rely on hatchery-reared broodstock instead of wild-caught fish, resulting in a green score for barramundi.