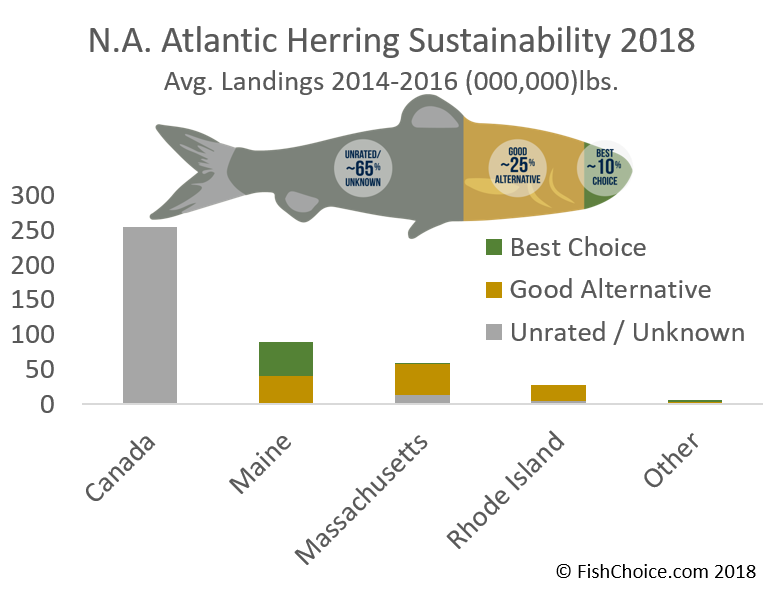 Key sustainability sourcing notes based on North American average landings of Atlantic herring from 2014-2016 and using the most recent 2014 Seafood Watch assessments are:

Atlantic herring are one of almost 200 herring species. These small schooling fish grow quickly, up to 14 inches (35.5 cm) in length and up to 15 years old. They reach maturity at four years, spawning from August to November, depending on their location.

Atlantic herring migrate from summer feeding waters to spawning waters in the fall. Females deposit 30,000-200,000 eggs onto the ocean bottom. Because of the large amounts of eggs produced by schools of herring at a time, a dense, thick layer covers the ocean floor. The eggs hatch after two to three weeks. The larvae then enter the water column where they remain for up to eight months. Herring are one of the few species that perform vertical migrations as larvae, doing so depending on the time of day, currents, or availability of prey. Vertical migrations also help them prevent displacement by tidal currents. Juveniles and adults perform vertical migrations based on changes in light and in response to their prey. Herring move deeper when it is lighter out to potentially avoid predation by seabirds.

Atlantic herring are found on both sides of the North Atlantic. Along North America, they are found from Labrador, Canada to Cape Hatteras, North Carolina – being most abundant north of Cape Cod, Massachusetts. Atlantic herring inhabit estuarine, coastal, and continental shelf waters from the sea surface to depths of up to 1,312 feet (400 meters). They are most common in depths from 36 to 656 feet (11 to 200 meters). Atlantic herring migrate in large schools to areas where they feed, spawn, and spend the winter. Adults prefer waters from 32-68° Fahrenheit (0-20° Celsius) in inshore waters and between 37-51° Fahrenheit (2.5-10.5° Celsius) on the continental shelf. Atlantic herring spawn as early as August in Nova Scotia and in eastern Maine and from October to November in the southern Gulf of Maine, Georges Bank, and Nantucket Shoals. During spawning, Atlantic herring prefer colder waters ranging from 41-48° Fahrenheit (5-9° Celsius). Adult herring will migrate south from summer and fall spawning grounds and will spend the winter months in southern New England and the US Mid-Atlantic.

NOAA’s Northeast Fisheries Science Center (NFSC) has been studying larval herring abundances since 1971. In US waters, Atlantic herring are assessed and managed as a single stock complex with two major spawning components. A study done in 2011 has found that Atlantic herring population trends are linked to the size of the haddock population. It has also been observed that egg predation by haddock can affect population levels in Georges Bank herring. The threshold herring population size is dependent on the haddock population size, meaning reducing fishing on herring may not be sufficient in the recovery of the population.

Herring populations are highly variable, possibly due to changing environmental conditions. A new acoustic tool was recently developed to monitor herring populations. A 2006 experiment studied the formation of herring clusters during spawning season at Georges Bank, their movements, and internal interactions. The researchers at NOAA’s NFSC believe that Atlantic herring form shoals using coordinated communication to avoid predators, and because it may be advantageous for group feeding and spawning.

Research needs for Atlantic herring include:

NOAA Fisheries and the New England Fishery Management Council (NEFMC) manage the Atlantic herring fishery in federal waters with the Atlantic States Marine Fisheries Commission (ASMFC) coordinating management of the herring fishery in state waters. The two entities develop their regulations in close coordination and will jointly implement quotas, catch caps, and other management measures. Individual Atlantic states are responsible for implementing regulations recommended by the ASMFC while NOAA is responsible for implementing regulations recommended by the NEFMC.

The US Atlantic herring fishery is managed under the Atlantic Herring Fishery Management Plan (FMP) and the Interstate Fishery Management Plan for Atlantic Herring. Under the FMP, fishery managers undertake regular stock assessments (every one to three years) for Atlantic herring and set annual catch limits for the entire fishery based on the results of those assessments. Managers then divide the total catch limit into four management areas each with its own specific area limit. These areas are: Area 1A in the Gulf of Maine, Area 1B from Cape Cod to the US exclusive economic zone (EEZ), Area 2 inshore south of Nantucket, and Area 3 south of Cape Cod to Georges Bank. Once a specific area limit is reached, the directed fishery in that area is closed and only incidental catch of Atlantic herring is then allowed. The fishery operates in Area 1A, 1B, and 3 in the summer and in Areas 2 and 3 in the winter. Among other measures the plan addresses are:

There are differences in management measures undertaken by the ASMFC and NEFMC. The NEFMC prohibits midwater trawling from June 1 to September 30 in federal waters while the ASMFC operates using area closures to protect spawning herring and a “days out” program that limits the number of days each week a vessel may fish for herring in state waters.

The majority of the Atlantic herring harvest (about 78 percent) occurs in the US – with Canada accounting for the remainder of the catch. The fishery is considered extremely valuable to the economy of the US Northeast. According to a 2015 stock assessment, Atlantic herring are not overfished nor subject to overfishing. The 2015 stock assessment also concluded that spawning stock biomass is well above target levels.

Atlantic herring tend to return to natal spawning grounds, making them susceptible to fishing pressure. However, females have an average fecundity for fin-fish, which helps with resiliency. Herring’s high fat content makes it an important food source for marine mammals, birds, and a number of fish.

Overfishing and exploitation in the 1960s caused the Atlantic herring fishery to collapse in the 1970s. Since the 1990s, the stocks have been recovering and current harvest rates are considered sustainable, according to the U.S. National Marine Fisheries Service.

Atlantic herring are primarily caught by mid-water trawlers and purse seines, as well as fixed traps called weirs. These fishing methods cause minimal damage to marine habitats because they don’t usually have contact with the seafloor, according to the U.S. National Marine Fisheries Service.

It is reported that bycatch in the Atlantic Herring fishery is low, consisting mostly of herring that’s undersized, spawning, or caught after the vessel has filled to capacity. Other bycatch include spiny dogfish, redfish, mackerel, haddock, pollock, and cod. Documented bycatch of mammals in the Atlantic herring fishery has occurred, but for a long time it was difficult to determine the extent of the fishery’s impacts on sea mammals. Observer coverage was increased as a result.

Since 2005, population assessments and analysis have been conducted to evaluate the effects of management actions. In 2006, fishery managers became concerned about an increase in fishing pressure on Atlantic herring, especially in the Gulf of Maine inshore area, and proactively proposed a limited access program for all herring management areas.