Silver hake, a.k.a. "whiting," is one of several similar hake and whiting species that inhabit cold and temperate waters on both the Northern and Southern Hemispheres. Most species are identified by their geographic origin and quality among species varies significantly. Similar to cod and haddock, silver hake has a softer flesh and less flakes. Among hake and whiting species, silver hake has one of the firmer meats.  Raw flesh should appear a translucent white with a watery appearance and when cooked, coloration ranges from pure white to off-white. Peak season for fresh silver hake is summer and fall. Freshness of the fish can be determined by the durability of the fillet. Avoid purchasing fillets that have a dull, brown, or dry appearance. Because it spoils quickly, silver hake is often used for frozen, value-added seafood products, and properly handled fresh silver hake has a shelf-life of up to five days. The flavorful fish has a high degree of culinary versatility at a noticeably lower price point than its Atlantic cod and haddock counterparts. 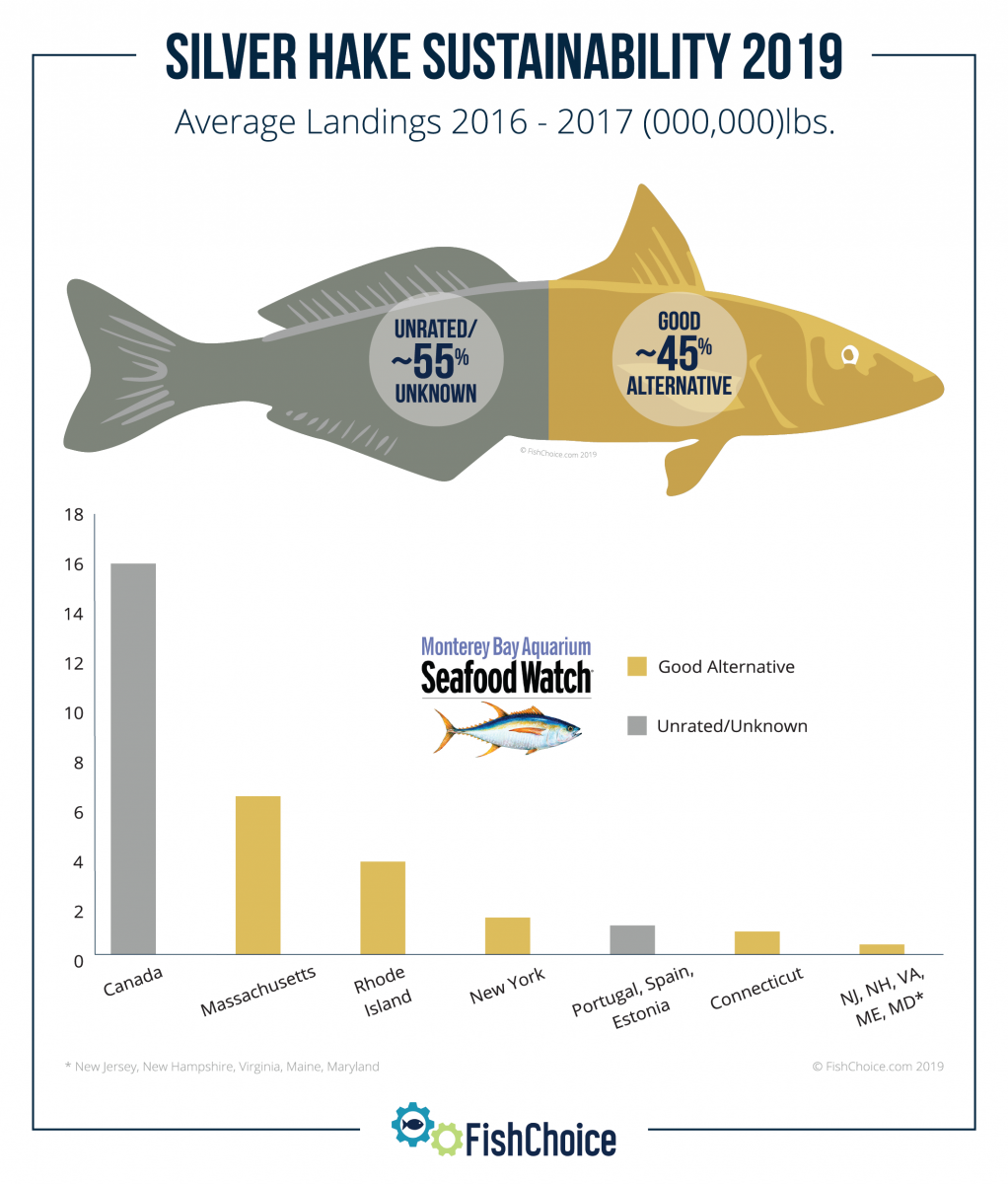 Based on average global landings of silver hake from 2016-17 and using the most recent Seafood Watch ratings as of July, 2019, the sustainability breakdown of silver hake is as follows:

Silver hake reach sexual maturity between ages two and three, and can live up to 14 years. Recently, however, most silver hake observed in US waters are not much older than six. They grow up to 28 inches in length and weigh up to five pounds.

Females produce and release up to three batches of eggs in a single spawning season, which peaks May-June in the south and July-August in the north. They spawn in the coastal region of the Gulf of Maine – from Cape Cod to Grand Manan Island, southern Georges Bank, and the southern New England area.

Silver hake are fast swimmers with large, sharp teeth. They are voracious predators, feeding on fish, crustaceans, and squid, and are important to the Northwestern Atlantic as both a predator and prey species.

Silver hake are widely distributed and are found throughout the Northwest Atlantic Ocean from Newfoundland to South Carolina. Two stocks have been identified in the United States – a northern stock inhabiting the waters of the Gulf of Maine and Northern Georges Bank and a southern stock inhabiting the waters of Southern Georges Bank and the Mid-Atlantic Bight. Silver hake are nocturnal predators and spend their days resting on sandy, muddy, and pebbly ocean floors. From dusk to midnight, they will move up in the water column to feed.

Silver hake have been observed at temperatures ranging from 36-63° F (2-17° C) and are commonly found between 45-50° F (7-10° C). They are found at depths ranging from 36-1,640 feet (11-500 meters) with older, larger whiting preferring deeper waters. The fish will migrate in response to seasonal changes in water temperatures, moving into shallow, warmer waters in the spring where they will spawn in the late spring and early summer months. During the summer, portions of both the northern and southern stocks can be found on Georges Bank. As the water temperature cools in the autumn months, whiting will move offshore into deeper waters. During winter, fish in the northern stock will move to deep basins in the Gulf of Maine while the southern stock will move to the outer continental shelf and slope waters.

The spatial distribution of silver hake is highly correlated with the position of the Gulf Stream. Changes in distribution are in response to changes in temperature on the continental shelf, which responds to circulation of the North/South paths of the Gulf Stream. Silver hake shift geographically to remain within their preferred temperature range, and the alteration in global climate is showing a population shift northwards

Silver hake are found in the Atlantic Ocean from South Carolina in the United States to Newfoundland in Canada. They are primarily targeted in the U.S. Atlantic. There are two silver hake stocks: a northern one in the Gulf of Maine and northern Georges Bank, and one in southern Georges Bank and the Mid-Atlantic Bight coastal region. A Seafood Watch report from 2016 noted that, according to the most recent assessment, both stocks are not overfished and overfishing is not occurring.

Silver hake are migratory and also move up through the water column to feed. They are mainly fished using small-mesh multispecies trawlers. In some areas, fishermen use modified gear to catch silver hake, which reduces contact with the seafloor. The fish prefer resting on sandy and muddy ocean bottoms during the day, a habitat that isn’t heavily impacted by bottom trawls, according to Seafood Watch.

The mid-water trawls that target silver hake result in little bycatch, FishWatch reported in 2015. Silver hake are part of the small-mesh multispecies fishery in the United States, which can unintentionally catch squid, Atlantic butterfish, and Atlantic mackerel. Overall, Seafood Watch called bycatch a moderate conservation concern in the fishery.

In the United States, silver hake are managed by NOAA Fisheries and the New England Fishery Management Council under the Northeast Multispecies Fishery Management Plan for small-mesh species. Measures include permitting requirements, a cap on groundfish bycatch as well as seasonal and spatial limitations. Seafood Watch called the management effective.