Petrale is a round or oval-shaped flounder with a big mouth and both eyes on its right side; the blind side is white and the eyed side is light to dark brown. Flatfish quality varies widely so the best ones will have uniform color and no bruising, according to some buyers. Petrale sole is sold fresh and frozen, whole and in skinless fillets. Petrale sole is an excellent source of low-fat protein, calcium, and other nutrients. The best time to buy petrale is in the winter, when prices are the lowest. Since larger flatfish sell for a premium, smaller fillets can be a good value, according to some buyers. 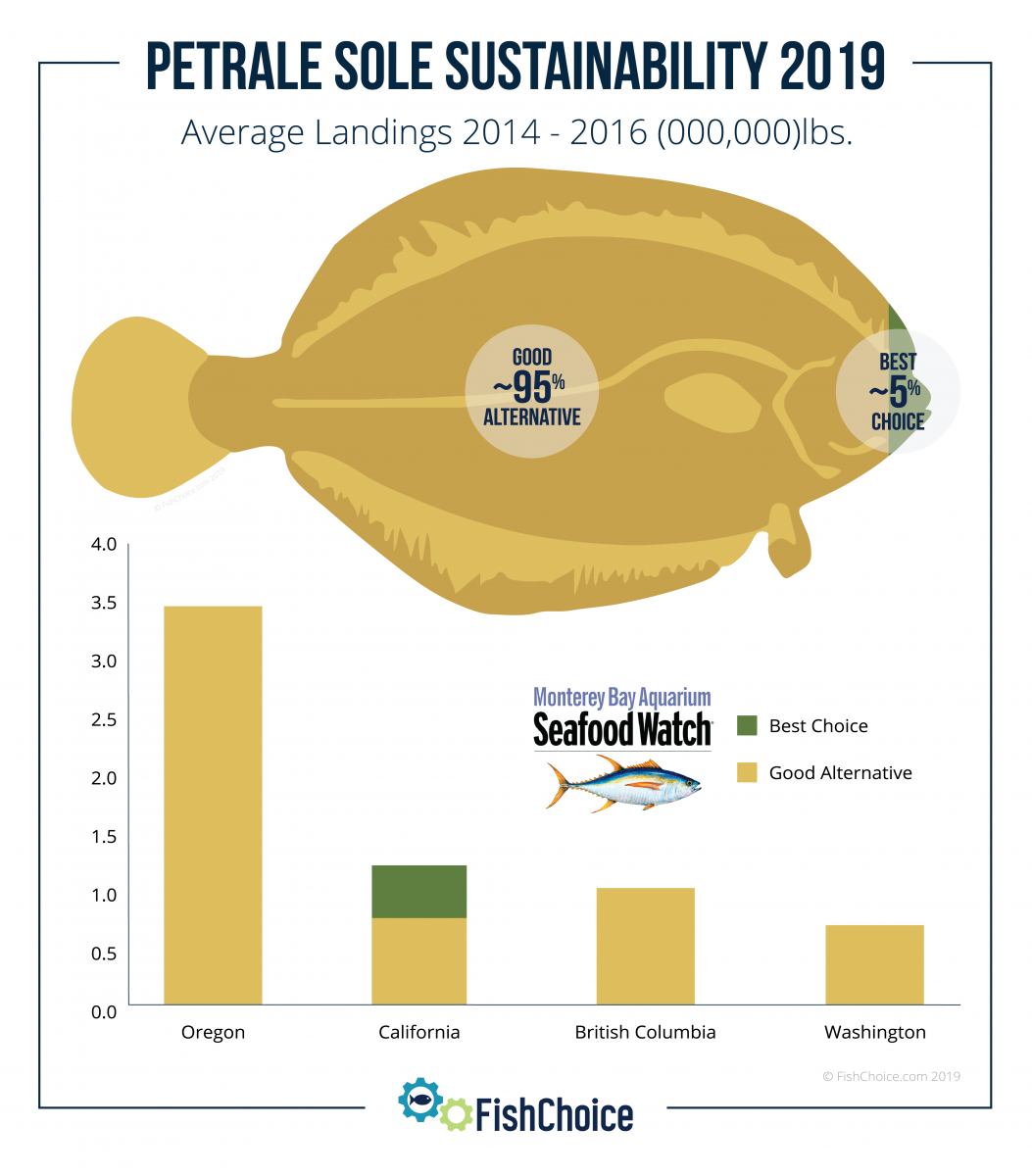 Based on average landings of petrale sole from 2014-2016 and using the most recent Seafood Watch ratings and MSC certifications, the sustainability breakdown of petrale sole as of February 2019 is as follows:

Petrale sole are fast growing flatfishes that can grow up to two feet long and live up to 17 years. Females are generally larger and grow to an average length of 24 inches, with males averaging 18 inches long.  Adults migrate from deeper water to shallower waters to feed in the summer. The majority of the spawning occurs in deep water from November to April along the North American west coast, though spawning occurs earlier in California. Petrale sole reproduce when they are three to eight years or when they reach about one foot long. Females can produce 400,000 to 1.5 million eggs. Larvae spend their first 6 months in the water column feeding on plankton before they are large enough to move to the ocean bottom. Adults feed on crustaceans, pelagic fishes, and even juvenile petrale sole. Sharks, marine mammals, and a variety of large pelagic fishes prey on adult petrale sole.

Petrale sole are found from northern Baja California to the Bering Sea, Aleutian Islands, and the Gulf of Alaska – though the species is considered rare north and west of southeast Alaska. Petrale sole spend their first six months in the water column. Juveniles and adults are bottom dwellers and live on sandy and muddy ocean bottoms along the outer continental shelf. Petrale sole are commonly found at depths from 330 to 500 feet deep though species can inhabit depths from 50 to 1,370 feet.

Petrale sole, which are actually more closely related to flounder, are found from southern California to Alaska. Although the population was considered overfished along the U.S. West Coast, a 2013 stock assessment concluded that the fish is rebuilding and no longer experiencing overfishing, according to FishWatch. In the Gulf of Alaska, the last assessment showed petrale sole is not overfished or subject to overfishing. In British Columbia, the population has been increasing from low levels of the 1990s and a 2014 Seafood Watch report indicated the stock is healthy.

Petrale sole are caught using bottom trawls that are usually destructive to the seafloor, but the sole typically dwell in sandy and muddy bottom habitats that require little recolonization to recover, compared with rocky or reef habitats. In British Columbia, Seafood Watch credited spatial management measures as helping to minimize potential habitat damage, particularly on corals and sponges.

Bycatch in the groundfish fishery that covers Petrale sole is higher in northern shallower offshore shelf waters, according to FishWatch. However, given the multispecies nature of the integrated groundfish fisheries, Seafood Watch noted that there are few species that can be called bycatch in the traditional sense.

In the U.S., petrale sole is managed by NOAA Fisheries, the Pacific Fishery Management Council, and the North Pacific Fishery Management Council. Fisheries and Oceans Canada manages the species in British Columbia. Measures in the U.S. West Coast include a limited number of permits, a trawl rationalization catch share program that started in 2011, gear restrictions, and area closures. In Alaska, petrale sole fall under the groundfish fishery management plan. Seafood Watch reports from 2014 called petrale sole management in the U.S. and Canada strong overall.