About half of striped bass sold in markets is farmed and referred to as hybrid striped bass. More than two-thirds of the striped bass harvest is landed by fishermen from Maryland and Virginia.  The highest quality stripers are caught in the late fall and winter. After stripers spawn in the spring and summer, their flesh loses fat - and flavor. Smaller stripers under 10 pounds tend to have more tender flesh. As a rule, pound net and trap-caught fish will be the best quality. When cooked, the flesh is white and moist and the cooked crispy skin is also known for its popular taste. When buying fresh striped bass look for bright red gills and a sweet smell. 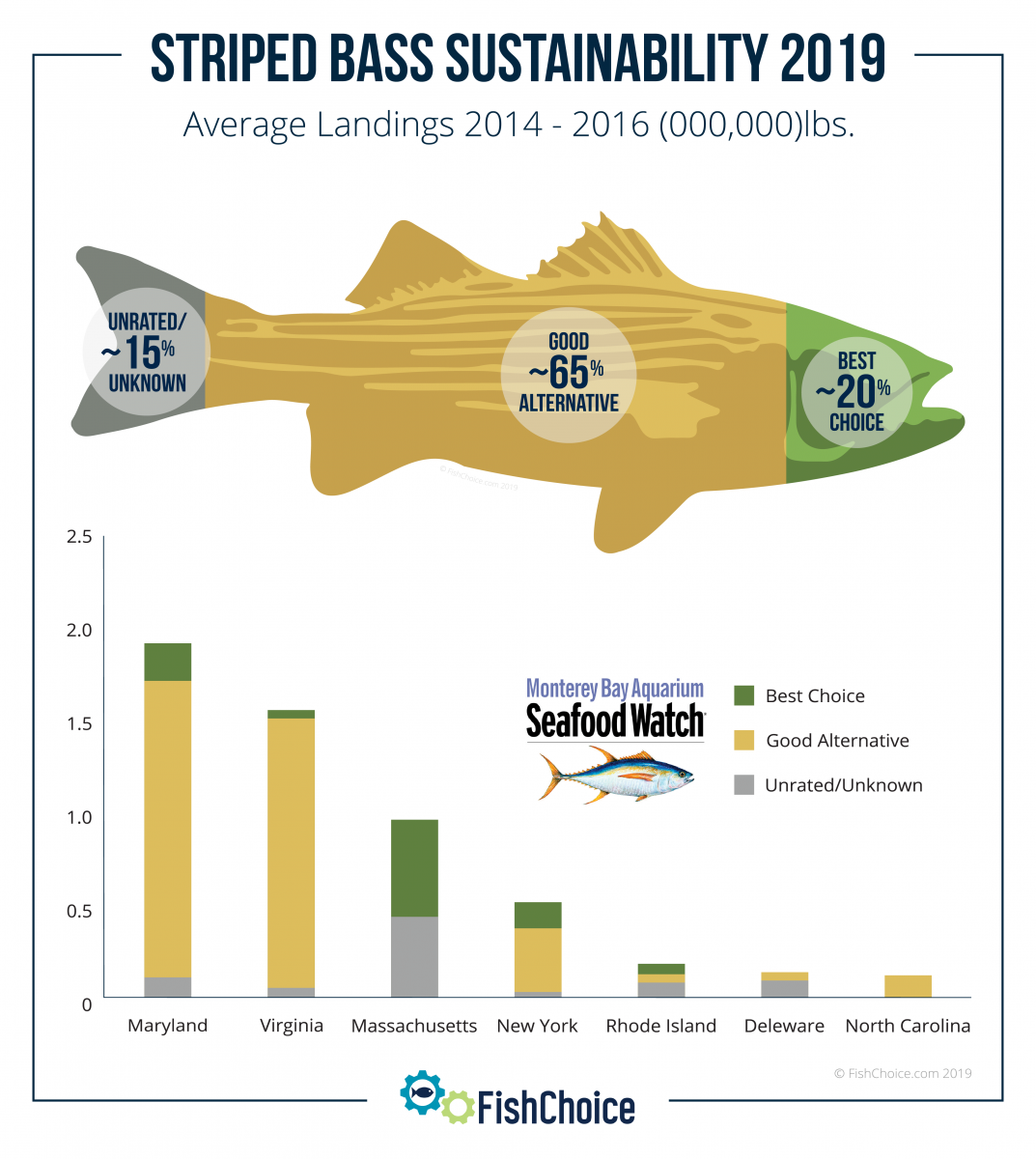 Key sustainability sourcing notes for striped bass based on landings from 2014-2016 and the most recent Seafood Watch assessments as of April, 2019:

Striped bass is the largest member of the sea bass family. They have stout bodies with seven to eight continuous horizontal stripes that run along each side (from their gills to their tail), with those towards the top of their body being more distinctive. Their undersides are an iridescent white or silver and on top they can sport a variety of colors ranging from light green and olive to steel blue, black or brown. The striped bass has two well-developed dorsal fins and a wide, forked tail. Their mouths are large and their lower jaws protrude slightly. A striped bass can grow up to five feet long and can weigh almost 80 pounds, though maximum growth depends on where it lives. Striped bass are also fairly long-lived and can have a lifespan of up to 30 years.

Striped bass can live in both freshwater and saltwater. They are anadromous species, meaning they will migrate from saltwater to freshwater to spawn, some even traveling up to 100 miles inland to do so. Spawning usually begins in the spring, when temperatures reach around 60o Fahrenheit. Females produce a large amount of eggs which they then release into the water where the male fertilizes them. Male striped bass reach sexual maturity between the ages of two and four years old. Females mature a bit slow and are able to start reproducing around four to eight years of age.

The larvae that hatch from the fertilized eggs feed on zooplankton and as they grow into juveniles, striped bass will start to eat insect larvae, smaller crustaceans, mayflies, and other larval fish. As adults, striped bass are piscivorous (fish-eating) and will eat almost any kind of finfish. Striped bass are strong swimmers which allows them to swim in harsh surf environments. Striped bass mostly travel in large schools, with the exception of some very large individuals, who will travel alone. Some fish species such as bluefish, weakfish, cod, and silver hake prey on smaller individuals. While large adults have very few predators, seals and sharks are known to prey on larger striped bass.

Striped bass are native to the Atlantic coast of North America and range from the St. Lawrence River in Canada to Florida and into the Gulf of Mexico from Florida to Louisiana. They have been subsequently introduced to numerous inland lakes and reservoirs as well as to the Pacific coast of North America where they now range from Mexico to British Columbia. Striped bass are anadromous – with adults migrating inshore annually to spawn in fresh or brackish water in the spring. Larvae develop in nursery areas near river deltas and in the inland portions of sounds and estuaries. Juveniles typically spend between two and four years in these coastal areas before migrating to the open ocean where they will live out the majority of their lives  – although this is not always the case and some adults may end up remaining in or near the rivers and coastal estuaries or their birth. Adults occupy a range of different habitats and can be found over rocks, boulders, aquatic vegetation, and mussel beds as well as along sandy beaches, rock shores, in the surf, and in the open ocean.

Three large systems account for the majority of the Atlantic fishery: the Chesapeake Bay, Delaware Bay, and the Hudson River. Striped bass from these systems – along with individuals from other, smaller systems ranging from Maine to North Carolina that contribute to a lesser extent to the total Atlantic population – are managed as one stock called the coastal migratory stock. The coastal migratory stock undergoes seasonal coastal migrations, undertaking a northern summer migration after spawning and a southward winter migration. The Albemarle Sound and Roanoke River stock of striped bass are managed separately from the costal migratory stock and fish south of the Pamlico Sound in North Carolina are not considered to be part of this stock. Striped bass south of the Albemarle Sound are considered to be non-migratory.

In the late 1970s and early 1980s, striped bass was overfished in the Chesapeake Bay. Pollution there also contributed to a decimated population. However, effective management measures have helped striped bass to return to record abundance. Today, the abundance is considered to be high. Striped bass, found along the U.S. Atlantic coast, are extremely fecund with a long reproductive lifespan so the species tends to be particularly resilient to fishing pressure.

Striped bass are mainly caught using gillnets, as well as trawls, hook and line, haul seines and pound nets. The gear used to catch striped bass has a minimal impact on ocean habitats.

The overall level of bycatch in the striped bass fishery is currently unknown. Gillnets are size-selective, which means there are fewer discards with this gear compared to others. The Blue Ocean Institute reported that marine mammals and sea birds are susceptible to getting caught in gillnets and called the bycatch levels in this fishery a moderate concern.

The striped bass fishery has substantial, strict management measures that include minimum size limits, quotas, scientific monitoring, gear restrictions, and seasonal fishery closures. A bycatch-monitoring program was set up within the past several years to study discards and help fishermen reduce their discards.