Spiny lobsters are sold fresh live and frozen in raw tails and meat, as well as whole (either blanched or fully cooked). Spiny lobsters are typically graded by the ounce and fresh supply is mostly available before the new year. These warmwater lobster tails will be smooth and have a spotted, greenish shell. Spiny lobsters have a soft texture, delicate flavor, and are frequently marketed as warmwater tails. The quality and texture of warmwater lobster tails varies considerably depending on handling. Unlike American lobster, spiny lobsters have a spiny hard shell for protection and lack large front claws. Buyer Beware: Avoid diver-caught tails that are mushy and textured from sitting too long on a boat.  Some buyers recommend finding trusted brands and sticking with them since some producers add weight with excessive glaze or a tripoly solution soak. 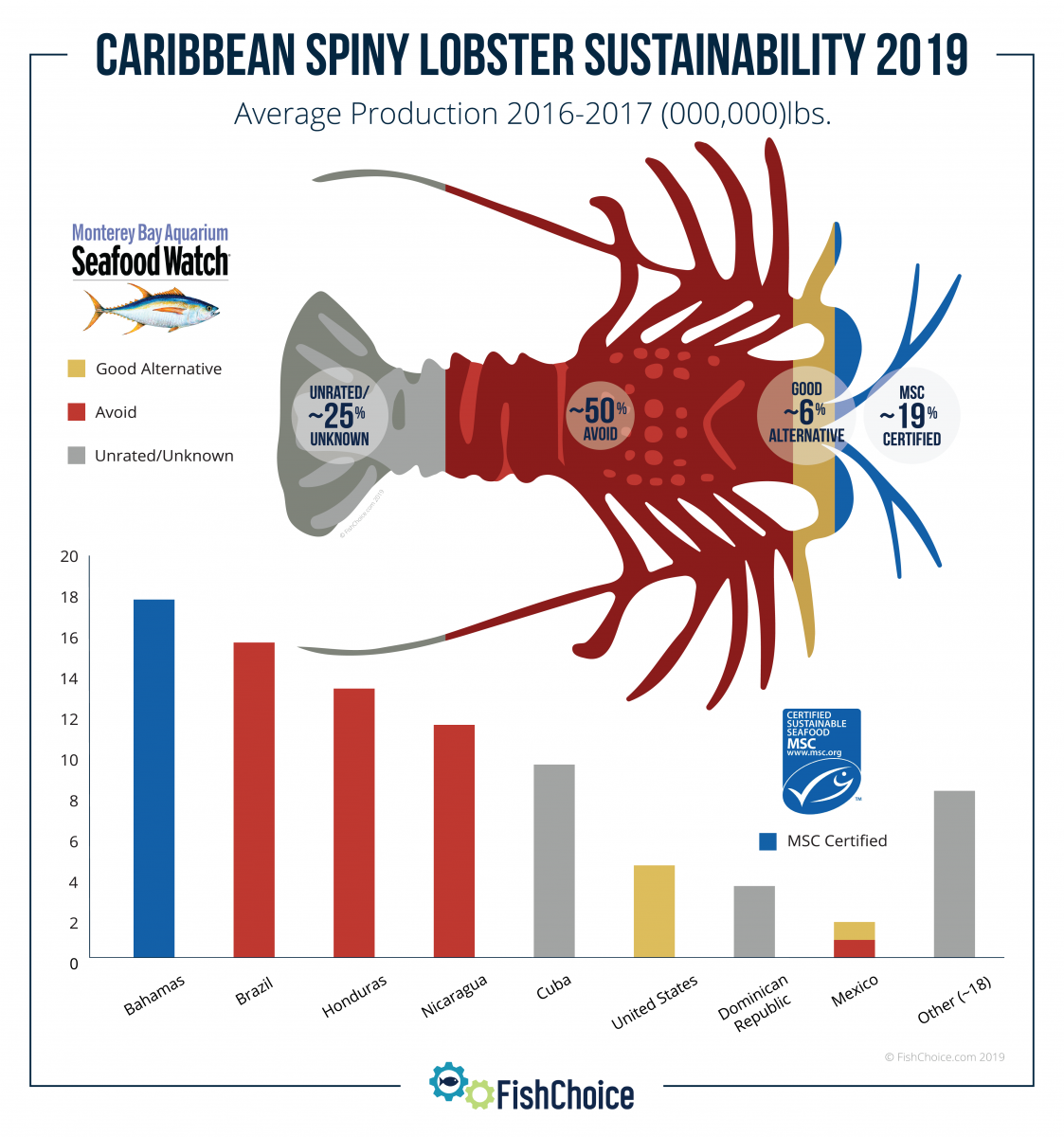 Key Caribbean spiny lobster sustainability sourcing notes based on landings data from 2016-17 and using the most recent Seafood Watch recommendations as of October 2019 are as follows:

Caribbean spiny lobsters are covered with forward-pointing spines to protect themselves from predators. Long, horn-like antennae above their eyes are used to scare off predators by rubbing them together to make a screeching noise, known as the “stick and slip” mechanism. Smaller “antennules” are used to sense movement and detect pheromones or chemicals in the waters, such as when eggs are ready to hatch. The antennules fold alongside their body when not in use. Unlike the American lobster, they lack large front claws. Caribbean spiny lobsters can also detect magnetic fields, which they use for migration. They have large compound eyes, and are able to sense light, color, and movement.

Spiny lobsters are thought to live 15 years or more, but scientists are unsure. They can grow up to 15 pounds and longer than three feet (one meter). Lobsters grow by molting. They shed their old shells while simultaneously absorbing water, thus expanding their body size. Within the first five to seven years of their life, they will molt about 25 times. Once they are older, they molt once per year. It takes them about two years to grow to legal harvesting size.

Females begin reproducing when they’ve reached between 2.5 to four inches (six to ten cm) in length. They spawn throughout the year in the Caribbean, and from April through September in the Florida Keys. The male spiny lobster deposits sperm packets on the underside of the female, who scratches them to release the sperm as she releases her eggs. The female can produce between 500,000 and 1.7 million eggs at each spawning period. She carries the fertilized eggs beneath her tail, and is considered “berried.” The eggs hatch in four weeks and the larvae float with the current, moving into shallow waters with sea grass. It takes about six months for the larvae to molt and metamorphose into juvenile lobsters.

Young spiny lobsters feed on soft-bodied plankton. Juveniles and adults are carnivores. Spiny lobsters eat at night, preying on snails, crabs, and clams. The lobster’s coloring is determined by the foods they eat; green algae is more common in shallow waters and red algae is more likely to be found in deeper waters. Caribbean lobsters range from red to brown and blue in color. Many predators feed on spiny lobster, including groupers, snappers, sharks, skates, turtles, and octopuses.

Caribbean spiny lobsters are found along the continental shelf of the southeastern United States from North Carolina to Florida as well as the Gulf of Mexico. They can also be found throughout the Caribbean Sea and along the coast of South America to Brazil. They inhabit depths ranging from just below the water surface to 1,650 feet (489 meters), though they are typically found at depths from 0 to 295 feet (90 meters). Larval spiny lobsters float in the water column and as they grow, will eventually swim to and settle in nearshore habitats. Juveniles will live in areas with dense vegetation such as surf grass and macroalgae until they reach about 0.6 to 0.8 inches, after which they move to and find shelter in crevices provided by sponges, soft coral, and other bottom substrates. After reaching 2 to 3.15 inches, spiny lobsters will leave their nearshore nursery grounds and will move offshore – settling in areas with rocky substrates and coral reefs where they can find adequate protection and shelter. Adults conduct seasonal nearshore and offshore migrations, moving offshore and into deeper waters during the winter.

Caribbean spiny lobsters, sometimes called Florida lobster or rock lobster, is a highly fecund species that can be long-lived, depending on the level of fishing pressure. Migration routes do make them easy to capture in large numbers. Caribbean spiny lobsters are found in the warm waters off the southeastern United States, in the Gulf of Mexico, and throughout the Caribbean to Brazil. Overall data about the species’ abundance remains uncertain although scientific stock assessments have been done in Florida, where the lobsters are not considered overfished. However, most Caribbean spiny lobster is imported from Latin America, where they are overfished.

These spiny lobsters are commonly caught using pots and traps made from wood, plastic or metal that are weighted to the seafloor. Lobster traps may have a moderate to severe effect on the ocean habitats such as rocky reefs and coral as well as sandier areas, according to a 2013 Monterey Bay Aquarium Seafood Watch report. Some spiny lobsters are also caught by divers. In Florida, ecological reserves have been created where lobster fishing is prohibited.

Bycatch in the U.S. fishery is limited but can include undersized lobster as well as finfish such as groupers, snappers, grunts and ornamental fish. Fishermen with certain permits are allowed to keep and sell incidental grouper and snapper catch, however. Lobster traps in the U.S. must have biodegradable escape panels to prevent ghost fishing. While sea turtles have had some interactions with spiny lobster traps in the Florida fishery, the number of entanglements is low. Regulations are not enforced in Nicaragua, Honduras, Brazil, and the Bahamas so bycatch there often includes undersized lobsters. In addition, finfish and crab are the most common non-targeted species caught in those regions but exact data is unknown.

The management of Caribbean spiny lobsters differs dramatically depending on the region. Measures in Florida, the U.S. Virgin Islands, and Puerto Rico include minimum size limits, seasonal restrictions, gear restrictions and annual catch limits. Management is considered effective in Mexico, where area restrictions, gear limits and scientific monitoring are in place. In Florida, population assessments have been expanded in recent years to include scientific research and observer data, according to the Monterey Bay Aquarium.

Regulations in the Bahamas, Belize, Brazil, Honduras, and Nicaragua are not commonly enforced, resulting in widespread illegal, unregulated and unreported fishing. In addition, scientific data is extremely limited. A Monterey Bay Aquarium report from 2013 called management effectiveness a high concern in Belize and the Bahamas and a critical concern in Brazil, Honduras, and Nicaragua.