The best-quality, high-price snow crab comes from the Gulf of St. Lawrence, where some Canadian processors use cryogenic freezers that produce a superior product, but most of this crab goes to the Japanese market. Most snow crab sections will be packed with some broken legs in the box and should be checked for excess glaze and broken pieces—the industry standard for broken pieces is 10%. Snow crabs are usually sold as sections or “clusters” (4 walking legs and a claw arm), typically graded 3/5 oz., 5/8 oz. and 8 ups; with 5/8 oz. sections compromising the bulk of the production. The meat yield from snow crab is about 17% compared to approximately 25% in king crab and Dungeness crab. The dirty brown barnacle-covered shells of older snow crab shells may look unappetizing but can have higher meat content, making them a good bargain, according to some buyers. Most snow crab consumed in the US is imported, primarily from Canada 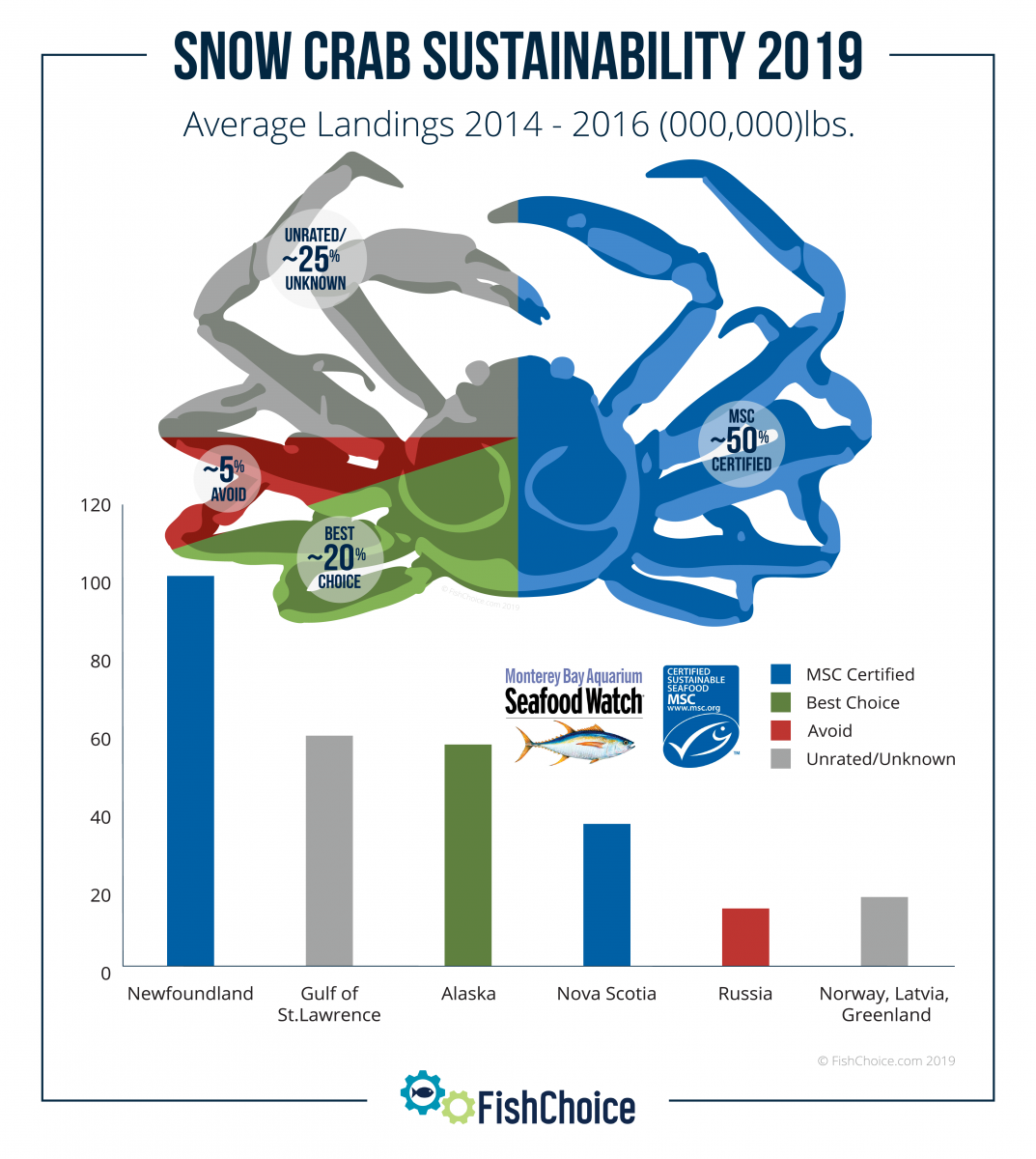 Key sustainability sourcing notes for snow crab based on landings from 2014-2016 and the most recent Seafood Watch assessments and Marine Stewardship Council (MSC) Certifications as of March, 2019:

In Alaskan waters, female snow crabs can carry up to nearly 100,000 eggs, depending on their size. They hatch their larvae in the spring when there is plenty of food in the water column. Larvae, which look like tiny shrimp, live in the water and feed on plankton. The larvae molt and grow through three stages before becoming megalops, which look like crabs with long tails. Megalops seek out suitable habitat, settle, molt, and metamorphose into the first crab stage. From this point forward they look like miniature versions of the adult crabs, and will live on the bottom for the rest of their lives.

Snow crabs, like all crustaceans, can only grow by molting, because their hard shells (exoskeletons) prevent a gradual increase in size. When a crab is ready to molt, they absorb a lot of water and swell up inside their old shell until it pops open. Then they wriggle out of the old shell and absorb even more water to increase their size. Right after molting they are very soft and vulnerable to predators until their new shell hardens. Snow crabs molt several times a year for the first couple of years, but as they grow larger they molt less frequently. When they have reached sexual maturity, both females and males have a terminal molt, after which they never molt again. Females seldom grow larger than 3 inches in shell width while males can reach 6 inches. Scientists estimate that snow crabs may live for up to 20 years.

Snow crabs will eat almost anything they can catch and break open with their claws, including fish, shrimp, crabs, worms, clams, brittle stars, snails, algae, and sponges. They will also scavenge on anything dead they find. In turn, they are eaten by seals, sea otters, octopi, other crabs, and a wide variety of fish.

Snow crabs have a wide distribution. In Asia, they’re found in the Japan Sea and the Sea of Okhotsk. In the Atlantic, they’re found from Greenland south to Maine. In Alaska they live in the Bering, Beaufort, and Chukchi Seas, although they’re only harvested in the Bering Sea. They prefer soft sandy or muddy bottoms, typically in water less than 650 feet deep, where they can burrow if threatened by predators and where they can feed on the animals living in the sediment.

Scientists with NOAA’s Alaska Fisheries Science Center annually survey the Bering Sea crab stocks to estimate their abundance. NOAA Fisheries and the State of Alaska use this information to determine the status of the stocks and to set the harvest limits for the following fishing season.

Scientists use model estimates of the number of mature males in the population (mature male biomass) at the time of mating as the measure for population status of snow crab. Mature male biomass has increased since its low in 2002, and is currently estimated to be at a sustainable level.

The Alaska snow crab fishery is managed by the North Pacific Fishery Management Council, NOAA Fisheries, and the Alaska Department of Fish and Game. The Bering Sea/Aleutian Islands King and Tanner Crab Fishery Management Plan defers management of crab fisheries to the State of Alaska with federal oversight. State regulations must comply with the fishery management plan, the national standards of the Magnuson-Stevens Act, and other applicable federal laws.

The Alaska snow crab fishery is currently managed according to three “S’s” – size, sex, and season. Only male crabs of a certain size may be harvested, and fishing is not allowed during mating and molting periods. These measures help ensure that crabs are able to reproduce and replace the ones that are harvested.

Every year, managers set the harvest limit for the next fishing season using the most recent estimates of crab abundance. Vessels carry vessel monitoring systems (satellite communications systems used to monitor fishing activities) and must report their landings electronically, so managers can monitor the fishery in real time and anticipate any issues. Observers are required to be on 20 percent of the vessels in the fishery. They collect data on the retained crabs, discarded crabs, and bycatch, and document any violations of fishing regulations. Fishermen must install escape panels and rings on their pots to prevent ghost fishing (when lost pots continue to capture and kill species) and to reduce bycatch. NOAA Fisheries also runs a voluntary buyback program to reduce excess participation in crab fisheries.

Snow crabs, which are found in the eastern Bering Sea and Atlantic Canada, have high inherent vulnerability to fishing pressure. In the 1990s, North American snow crab populations were overfished. In 2011, stock assessments showed that the snow crab population in the eastern Bering Sea had recovered from an overfished condition, according to Seafood Watch.

A 2012 Seafood Watch report for the Canadian fisheries found indications of possible future declines in the Eastern Nova Scotia snow crab population. There are moderate concerns about populations in the Newfoundland and Labrador fishery. The Southern Gulf of St. Lawrence snow crab population has fluctuated, but Seafood Watch suggested that the current fishing level is unlikely to reduce stock productivity there.

The gear commonly used to fish snow crab tends to consist of large steel mesh traps or pots that soak on the seafloor for one to three days. Gear effects from pots tend to be minimal in snow crab fisheries since they are usually set in soft, muddy habitats, according to Seafood Watch. Such sand and silt environments are less likely to be affected than harder habitats.

Most bycatch in the U.S. snow crab fishery consists of females and undersized males. In the eastern Bering Sea, there is concern about Tanner crab bycatch, which are not experiencing overfishing but have medium vulnerability to fishing pressure. The gear used to catch snow crab is required to have escape rings for undersized crabs and biodegradable mesh to prevent ghost fishing.

Seafood Watch reported that since 2001, encounters with at-risk leatherback turtles have been documented in the Eastern Nova Scotia snow crab fishery and may account for one to five leatherback deaths per year. Two threatened wolffish species are incidentally captured in the Newfoundland and Labrador snow crab fishery.

Snow crab fisheries in Canada are managed by Fisheries and Oceans Canada using an individual quota system as well as measures such as size limits, total allowable catches, gear restrictions, and area closures. Seafood Watch called management in Eastern Nova Scotia highly effective. However, a 2012 report called management in Newfoundland and Labrador moderately effective due to lack of clearly defined metrics for population health and lack of standardized catch per unit effort measurements over time. The Southern Gulf of St. Lawrence management was also called moderately effective. Although management there is developing a precautionary approach, Seafood Watch said the mechanism used to respond to population trends remained unclear.