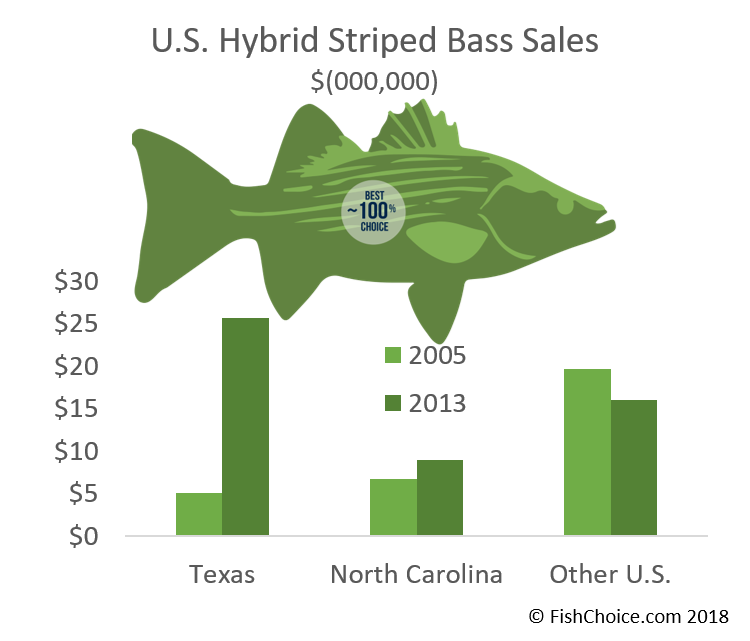 Key sustainability sourcing notes for hybrid striped bass based on production from 2012-2015 and the most recent 2012 Seafood Watch assessment:

Hybrid striped bass is a hybrid of striped bass and white bass. They are distinguishable from the striped bass by their broken (rather than solid) horizontal stripes. Their coloring depends on the water quality of their habitat.

If the eggs come from white bass and the sperm from striped bass, the offspring is known as “sunshine bass” or “Cherokee bass” because they were first stocked in Cherokee Lake, Tennessee. If the eggs come from striped bass and the sperm from white bass, the offspring is known as “palmetto bass.” Optimum growing conditions are between 77°F to 81°F (25°C to 27°C). Hybrids grow quickly within the first two years, and can grow up to 22 pounds. Most are caught between two and five, or 10 to 15 pounds. They usually live up to five or six years, which is more similar to white bass than striped bass. Hybrid striped bass are usually harvested between 1.5 to 2.5 pounds in weight and 18 to 24 months old.

Males mature at one year old, and females between two and three years old. Unlike most hybrid organisms, hybrid striped bass are fertile. Spawning occurs in the spring. Females produce between 65,000 and 200,000 eggs. The eggs float with the current for two to three days, until they hatch. The larvae do not begin feeding until five days old and are sustained during the intermediary period by a large oil droplet they can use as a food source. Flowing water is critical to the success of striped bass spawning because it keeps the eggs from sinking and becoming covered with silt that would eventually suffocate them.

Hybrid striped bass are aggressive feeders, feeding on shad, bluegill, sunfish, minnows, and crappie. They are most active around dusk and dawn, when there is minimal light.

The tanks and ponds where hybrid striped bass are grown are primarily located inland in the United States, and not in ecologically sensitive areas.

This carnivorous species is fed a diet of 18-35% fish meal and the rest is made up of grain-based proteins. The primary source of fish meal is Atlantic menhaden, a fish that at last assessment was not being overfished. The U.S. Department of Agriculture and the National Oceanic and Atmospheric Administration are collaborating on an initiative to find viable alternatives to fish meal for aquaculture production.

While hybrids are susceptible to the same diseases as wild striped bass, the risk of transmission is not known.

The likelihood of escape from the ponds and tank systems where the hybrids are raised is low.