Golden tilefish is low in fat and has a delicate, sweet flavor similar to lobster or crab. Tilefish is primarily almost always sold fresh, usually whole, though it is also sold fresh in fillets and steaks, and when sold frozen, it is skin-on, bone-in fillets, and steaks. Tilefish is graded and priced by size, with larger fish being more expensive. Although smaller tilefish are more affordable than larger ones, buyers caution that they also have softer flesh and shorter shelf-life. Tilefish yields thick fillets with a row of pinbones and raw tilefish flesh is light and pinkish but turns flaky and white when cooked. 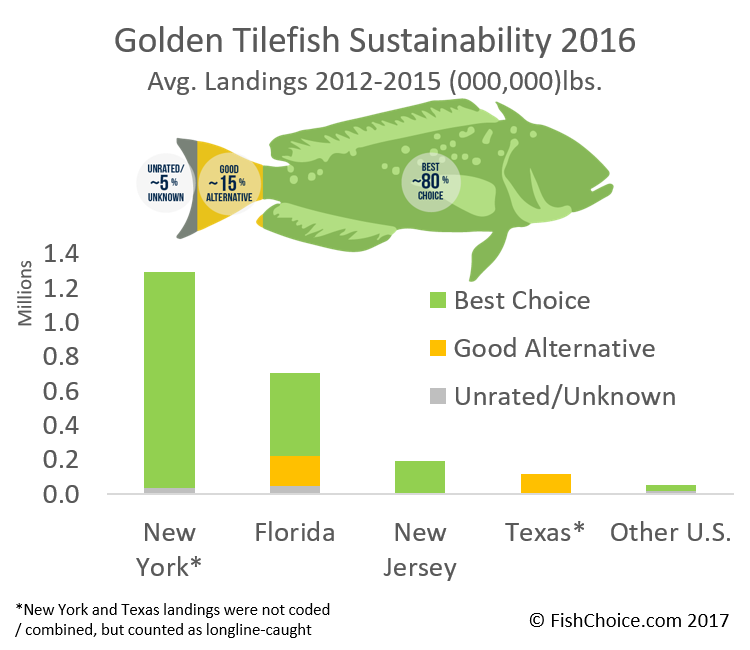 *Landings for New York (most) and Texas (all) were not coded or combined for gear types, but considered a longline gear-type

Golden tilefish are colorful, with a blue-green back and spots of yellow and gold and multi-colored fins. Their underbelly is white, and their head is a rosy-pink with blue around the eyes. These colors have given them the nickname “the clown of the sea.” Golden tilefish are distinguishable from other tilefish by the large crest on their head. Males have a larger crest than females. They are protogynous hermaphrodites, meaning they begin life as females and transition into males later in life.

These tilefish grow slowly, up to four feet in length (one meter) although most are harvested at two feet in length (0.6 meters). Females live up to 46 years old and males up to 39 years old. Recent radiometric dating techniques suggest that golden tilefish may live as long as 50 years. They reach maturity between two and four years old when they are about 13 inches (33 centimeters) in length and weigh three pounds.

Spawning season for golden tilefish peaks in June in the Mid-Atlantic, and April to June in the South Atlantic. Females release two to eight million eggs.

Golden tilefish are found along Atlantic North America from Nova Scotia, Canada to Florida and into the Gulf of Mexico. They are also found in the northern coast of South America. Golden tilefish are a deepwater species and inhabit depths from 250 to 1500 feet (76 to 457 meters) deep and temperatures from 49 to 58° Fahrenheit (9.4 to 14.4° Celsius). They are often found in or around submarine canyons and steep slopes made up of mud, clay, sand, and other substrate in which they burrow into. They often form vertical burrows in these regions that will in turn provide habitat for other species of fish and crustaceans. Golden tilefish are also known to form horizontal burrows or “pueblos” into the sides of marine canyons. While individuals are often found near canyons, small concentrations of golden tilefish are known to occur.

Tilefish (aka "Clown of the Sea") are a long-lived and slow growing deep-water fish. Golden tilefish tend to be larger and live longer than other tilefish. Factors that include a narrow geographical range and susceptibility to physical changes in the environment make golden tilefish vulnerable to fishing pressure.

Golden tilefish are found primarily in the Mid-Atlantic as well as in the South Atlantic and the Gulf of Mexico. The South Atlantic stocks are above target population levels, and the stock in the Gulf of Mexico is considered stable. In 1998, Mid-Atlantic golden tilefish were declared overfished but have since shown signs of recovery. A 2011 assessment indicated that the Mid-Atlantic population was 4% above the target, but the National Oceanic and Atmospheric Administration reported scientific concern about uncertainty with the assessment model.

Small longline fisheries in Mid-Atlantic and Southern New England mainly catch golden tilefish, although some are also caught using otter trawls. Bottom longlines can do moderate damage to the seafloor when they come in contact with it, but that gear tends to be restricted to deeper waters in South Atlantic and the Gulf of Mexico. Several silty, clay habitats where golden tilefish are typically found have become protected from fishing.

Since golden tilefish tend to be targeted selectively by longline fishermen, there is low bycatch as a result. Bycatch can include deep-water snapper and grouper. Although golden tilefish can become bycatch in the Mid-Atlantic trawl fishery, those numbers are thought to be low.

NOAA Fisheries is responsible for managing golden tilefish in the Mid-Atlantic, the South Atlantic, and the Gulf of Mexico. Fishing management plans in these areas include annual catch limits, individual quotas, required permits, landing report requirements, restrictions on gear and depth, as well as protected areas. Despite strong management measures, sustainability goals have yet to be fully met.