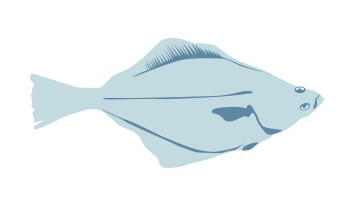 English sole is available year-round but is most common on short trips during spring and summer. English sole is a smaller flatfish and because it has smaller fillets it can be a good value that also holds well in many preparations. The fish is more delicate in both taste and texture compared to Dover sole (M. pacificus) The flesh should have a uniform color, lack bruises, and any yellow or gray color indicates old age. Fresh fish can last on ice up to 10 days. English sole has a clean, white color when cooked and the distinct iodine smell the fish has is also diminished when cooked.

English sole are a flatfish with both eyes on the right side of their head – with the upper eye also being visible on the underside. Female English sole grow up to two feet in length, twice as long as males, and can live over 20 years, four years longer than males.

Male English sole reach sexual maturity at two years, and females at three. Spawning occurs from winter to spring on muddy ocean floors 165 to 230 feet deep. Larvae remain near the surface for two to three months before they move with the tide towards estuary nursery areas. They spend one to two years in the nursery areas before migrating to deeper waters in the early summer.

English sole are found off the Pacific Coast of North America from the Bering Sea and Aleutian Islands to Baja California Sur, Mexico. Past survey data indicates nearly all occur at depths below 820 feet (250 meters) with adults living in waters more than 1800 feet deep (549 meters). Larval and juveniles live in nursery areas such as estuaries and nearshore habitats while older juveniles and adults prefer soft sand or mud bottoms further offshore. They have also been known to inhabit eelgrass habitats. After a spawning season in the spring, English sole will travel north to summer feeding grounds, retuning south in the fall. However, these migrations are limited in range. Based on these limited movements, tagging studies have identified multiple separate stocks along North America.

English sole is a flatfish more closely related to flounder that is caught off the North American West Coast from the Bering Sea to Baja, California. Along the U.S. West Coast, the population was found to be healthy in a 2013 stock assessment. The two stocks of English sole in British Columbia’s waters are also considered healthy, according to a 2014 Seafood Watch report. English sole is part of a flatfish complex in Alaska that has a set overfishing level, and at the most recent assessment in 2013 that level had not been exceeded.

English sole are primarily caught using bottom trawls that are usually highly destructive to ocean habitats, but the fish tend to inhabit softer habitats with sand and gravel that are more resilient to trawling, FishWatch reported. Seafood Watch reports from 2014 for English sole noted that the vessels targeting them follow spatial and gear restrictions that also limit the trawling impact, particularly on sponges and corals.

Overfished rockfish have been caught unintentionally in the trawls that target English sole, but gear modifications and management measures such as minimum trawl mesh sizes, small footrope regulations, and the mandatory use of selective flatfish trawl nets in areas off the coasts of Oregon and Washington have helped reduce bycatch, according to FishWatch. Bycatch levels are very low in the Alaska flatfish fishery that includes English sole. In British Columbia, corals and sponges can be caught accidentally although new measures implemented in 2012 have minimized that bycatch, Seafood Watch reported in 2014.

NOAA Fisheries, the Pacific Fishery Management Council, and the North Pacific Fishery Management Council manage English sole in the United States. In British Columbia, Fisheries and Oceans Canada manage them. Along the U.S. West Coast, management measures include federal limited entry permitting, gear restrictions, and a trawl rationalization catch share program that sets limits. In the Gulf of Alaska, the Bering Sea and the Aleutian Islands, English sole are covered by a license limitation program limiting the number, size, and specific operation of vessels in groundfish fisheries, FishWatch reported. A total allowable catch levels are set on the fish there as well. Management of the English sole fisheries in North America is considered strong overall.