Dover sole are also known as “slime” or “slippery” sole because they excrete mucous that makes them difficult to hold. Dover sole is sold fresh and frozen whole, headed and gutted as well as dressed, and in fillets, however, it is nearly always filleted due to its slimy skin. Dover sole from the Pacific has a mild taste and delicate texture, although it is not as mild as European Dover sole. Since flatfish quality can vary immensely, buyers recommend looking for Dover sole that has uniform color and lacks bruises. They also recommend against purchasing these fish whole since soft-fleshed fish may not be detected until after they’ve been filleted. Availability of fresh Dover sole varies throughout the year while frozen or thawed Dover sole primarily from Alaska is available year-round. 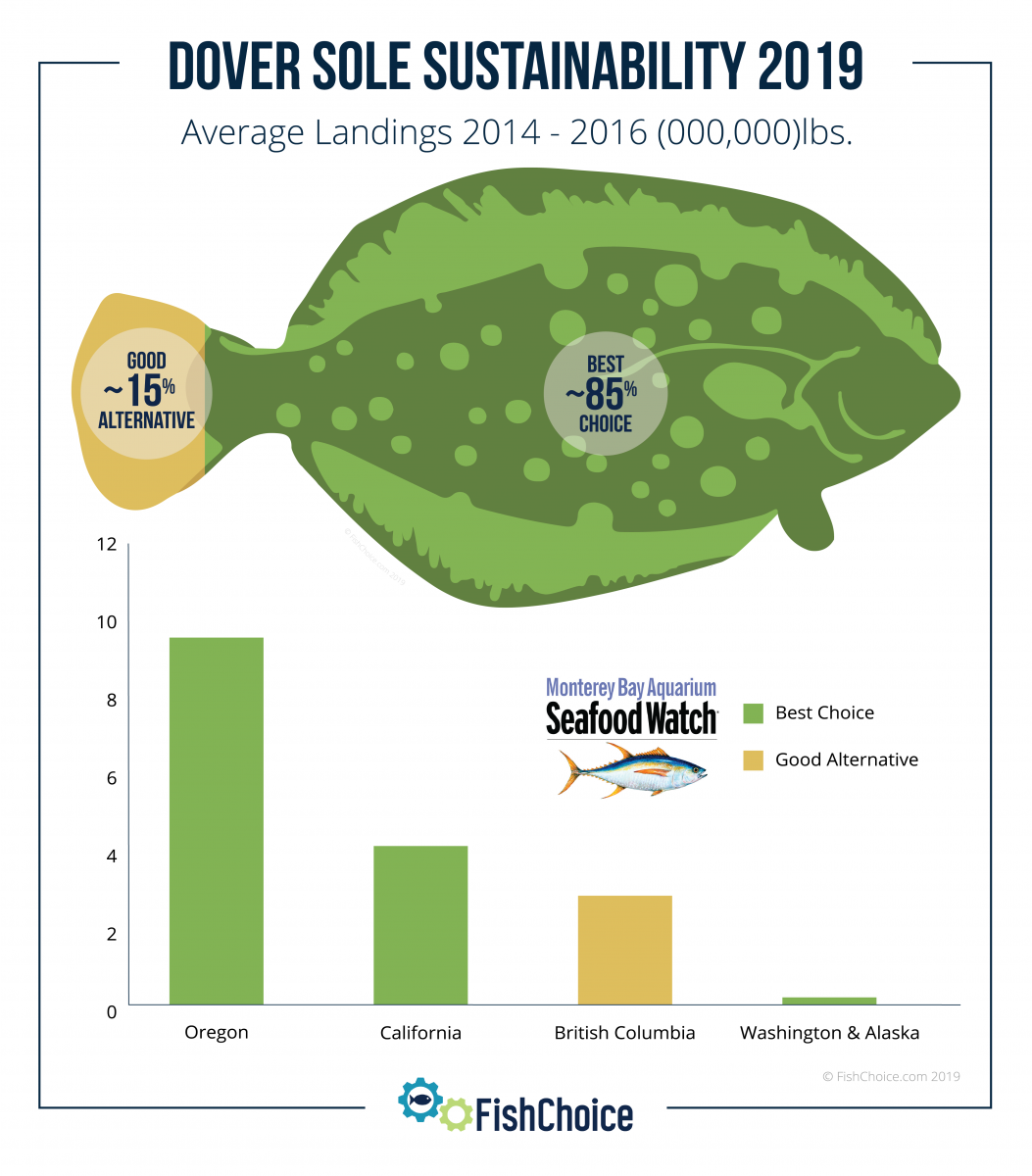 Key sustainability notes for Dover sole from average landings from 2014-2016 and based on the most current Seafood Watch ratings as of January, 2019:

Dover sole are flatfish with both eyes placed on one side of their head allowing them to easily hide and camouflage themselves under the sand. They also excrete mucus onto their scales, which makes them extremely slippery and difficult to pick up, giving them the name “slippery sole.”

Males live up to 58 years, and females up to 53 years. However, female Dover sole grow faster and larger than males, growing up to 30 inches (76 cm) in length. Males grow to about 27 inches (69 cm) in length.

Spawning season varies by location for Dover sole, but is always done near the ocean floor in water deeper than 1440 feet (439 meters). In the Gulf of Alaska it is from January to August, off the coast of Oregon it is from November to April, and in Puget Sound it is from January to March. Females produce fairly large eggs (0.1 inches), which are fertilized externally in the upper part of the water column. The hatched larvae settle in deeper water farther inshore in suitable nursery areas. Some populations can remain as larvae for as long as two years due to unfavorable environmental conditions. Scientists call these populations “holdover” larvae. All flatfish are born upright with their eyes on either side of their head. As they mature, their body tilts and they begin to swim flat with both eyes on one side.

Dover sole feed in daylight using sight and smell. Their small mouths are adapted to eating the small crustaceans that live in the sediment. Larvae feed on small or larval crustaceans, eggs, and plankton. Juveniles and adults feed on worms, bivalves, brittle stars, and small crustaceans. Larval Dover sole is preyed upon by seabirds and surface-dwelling fish. Sharks, bottom-feeding marine mammals, cod, and flounder prey upon adult Dover sole.

Dover sole are found along the Pacific Coast of North America from the Navarin Canyon in the Bering Sea and western Aleutian Islands to San Cristobal Bay, Baja California, Mexico. Dover sole live near the ocean floor – with adults and juveniles preferring soft mud or sand bottoms. They inhabit waters from 7 feet (2 meters) to 4,500 feet (1371 meters) deep, with the highest abundance generally occurring between 656 feet (200 meters) to 984 feet (300 meters) deep. Juveniles are found in deep near shore waters and travel to deeper waters as they age. In the summer and fall, adults and juveniles can be found in shallow water feeding grounds. In late fall and early winter, Dover sole migrate offshore into deeper waters to spawn. While Dover sole make an inshore-offshore seasonal migration, little north-south coastal migration occurs.

Pacific Dover sole is not actually sole but a flatfish more closely related to flounder. Larger in size than European Dover sole, Dover sole found in the Pacific is long-lived and has medium fecundity. Dover sole, found in the waters off California, Oregon, Washington, British Columbia, and Alaska, have variable abundance that is considered healthy overall. Dover sole levels in the Gulf of Alaska have been increasing in the past 15 years and the biomass there is now more than double the target population level.

Dover sole are primarily caught using trawls. Other gear used includes hand lines and traps. While trawls can negatively impact rocky seafloors and reefs, the trawls in this fishery target the flatfish in the soft muddy areas where they live. These kinds of areas in the Gulf of Alaska and off the West Coast tend to be more resilient to trawling.

There is little bycatch in the Pacific Dover sole fishery, helped by a relatively new catch-share management plan on the West Coast and gear improvements that help trawler avoid bycatch hotspots, according to the Environmental Defense Fund.

Pacific Dover sole are managed by NOAA Fisheries, the Pacific Fishery Management Council on the U.S. West Coast, the North Pacific Fishery Management Council in Alaska, and Fisheries and Oceans Canada in British Columbia. On the West Coast they are managed with other groundfish species, and in Alaska under two flatfish complexes. In Alaska, management measures include a conservative annual catch limit, and limitations on the number, size and operation of vessels targeting the fish. In the Washington, Oregon, and California groundfish fisheries, only about 400 federal limited entry permits are available. Other measures there include gear restrictions and a trawl rationalization catch share program implemented in 2011. Seafood Watch reports from 2014 characterize Dover sole management as strong.