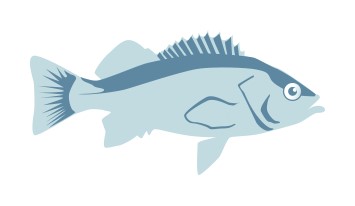 Whole yellowtail rockfish should have shiny, bright, and clear eyes and the skin should be shiny and bright.  If the skin appears yellow, orange, or wrinkled that is an indication that it is stale. Rockfish fillets shouldn’t have signs of browning, graying or yellowing and the fillets hold together better with skin on. Gills should be bright pink or red (not brick red) and scales should be shining and clinging to the skin. Flesh on fillets should be moist and when pressed, bounce back to original form.

Yellowtail rockfish grow more than two feet in length and can live up to 50 years. They mature between ages three to five. Fertilization of the eggs is internal, and the females give birth to live young. Females can host between 50,000 to 600,000 eggs depending on their size. Adult yellowtail rockfish feed on shellfish and small fish such as shrimp and anchovies.

Yellowtail rockfish populations are negatively affected by climate change because successful recruitment, growth, and survival rates correlate with strong upwelling and cooler water. Warmer water also influences food availability and increases in ocean acidity will result in a loss of shelled prey options that account for a large part of yellowtail rockfish diet.

Yellowtail rockfish are found along the Pacific coast of the United States and Canada and range from San Diego, California to Kodiak Island, Alaska – with the center of yellowtail rockfish abundance occurring from Oregon to British Columbia. The species inhabits depths of 0-1801 feet (0-549 meters) and are usually caught by fishers at depths ranging from 361-659 feet (110 to 201 meters). Yellowtail rockfish are common along the middle shelf near the seafloor – though not on seafloor. Adults are considered semi-pelagic or pelagic and occur near steep slopes or above rocky reefs. They can also be found above mud with cobble, boulder, and rock ridges as well as sand bottoms. Adults can be found alone or in schools (sometimes comprising more than 1000 individual fish) in these areas. These schools may persist and stay in the same location for many years.

Because yellowtail rockfish are caught in a multi-species groundfish fishery, the distinction between targeted and bycatch species is not always clear. What is usually considered as bycatch doesn't necessarily apply for these fisheries, but rather the targeting of specific species within the groundfish complex and avoiding others is how bycatch is evaluated. Bycatch is managed on the U.S. West Coast through a combination of gear and spatial restrictions and is considered mostly effective and varies by specific gears. Bycatch is a major concern in British Columbia primarily due to the uncertainty of stock statuses of several other rockfish species as well as some shark species.

In the U.S., yellowtail rockfish are managed with other non-hake groundfish by the Pacific Fishery Management Council. Management measures include harvest control rules, gear restrictions, catch limits, and scientific monitoring. While U.S. management of yellowtail rockfish is considered strong and effective, management in British Columbia is considered only moderately effective because of the lack of harvest control rules and stock reference points.