Yellowfin sole is the target of the largest flatfish fishery in the U.S. by volume and it is the smallest commercial flatfish species in the North Pacific with a harvest length around 18". Most yellowfin sole weighs less than a pound so it’s usually sold as thin two- to four-ounce fillets. Yellowfin sole has a firm, delicate texture with small flakes and when cooked and a mild, sweet flavor. It is available throughout the year, primarily as frozen skinless, boneless fillets. It is almost always frozen H&G at sea and processed in China into fillets before being sold in the U.S. Quality of Pacific flatfish, including yellowfin sole, varies greatly so it’s important to look for unbruised fillets that have uniform color. Purchasing whole yellowfin sole should only be done if the buyer has a way to negotiate with the supplier since there can be a high percentage of soft-flesh fish. 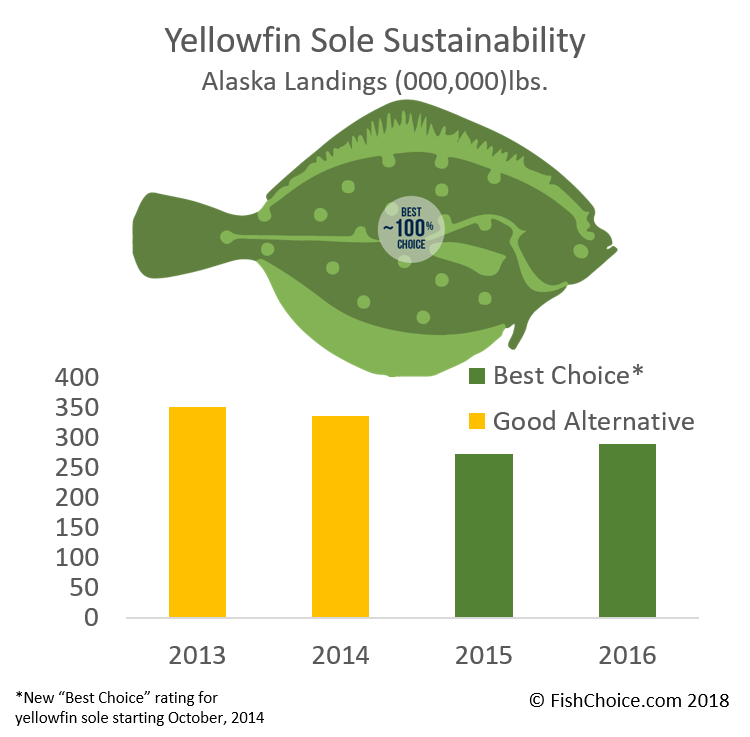 Yellowfin sole are a flatfish with a small mouth and both eyes located on one side of their body. Yellowfin sole get their name from their yellow-colored fins. These fins also have faint dark bars, with a narrow dark line at the base. Their bodies are typically rounded with a rounded tail fin. The upper side where their mouths and eyes are located is an olive to dark brown with dark mottling and their underside is pale. Rough scales cover both sides of the body. Yellowfin sole can grow up to over 1.5 feet long and can weigh upwards of a pound. The species is also long-lived, with a lifespan of up to 39 years.

Adults spawn in the spring and summer months, migrating from the outer continental shelf to the shallow waters along the inner shelf. These shallow waters act as nursery grounds for settled juveniles. During spawning periods, females have a high reproductive potential and can produce between one and three million eggs. Females are able to reproduce around the age of 10.5 years (when they are approximately one foot long).

Yellowfin sole are distributed off the Pacific coast of North America from British Columbia to the Bering Sea and north to the Chukchi Sea. The majority of the US stock occurs on the eastern Bering Sea shelf and, subsequently, the major yellowfin sole fishery occurs there. They also can be found across the Pacific, off the coast of South Korea to the Sea of Japan and to the Sea of Okhotsk. Adults are benthic and live on soft, sandy ocean bottoms up to depths of 2300 feet (700 meters) – though most are found around 299 feet (91 meters) deep. Yellowfin sole occupy different winter, spawning, and summer distributions on the eastern Bering Sea shelf. Adults will spend the winter months near the outer shelf margins in deeper waters and will move to the inner shelf and to shallow waters less than 98 feet (30 meters) in the spring to feed and spawn.

Yellowfin sole is a type of flounder that is slow growing, long-lived and greatly affected by changing environmental conditions, making it vulnerable to fishing pressure. However, its wide distribution over much of the North Pacific helps counterbalance these traits somewhat.

Yellowfin sole, which is primarily harvested in the United States, is the largest flatfish fishery in Alaska due to its abundance. Although yellowfin sole was harvested heavily in the 1950s and ’60s, its population has recovered to above target levels.

Factory trawlers in the Bering Sea off Alaska are the primary means of catching yellowfin sole. Trawling tends to be highly destructive to seafloor habitats but yellowfin sole typically dwell in sandy, muddy bottom habitats that require little rebuilding to recover compared to rocky or reef areas.

Bycatch in the yellowfin sole fishery is considered low, and does not include overfished species. Restrictions are in place to keep bycatch low, and according to the Environmental Defense Fund, better gear design is helping trawlers avoid areas where bycatch will be more likely.