Pacific ocean perch, part of the rockfish family, range from California through Alaska and although generally available year-round, landings can fluctuate within the year. When buying whole fish, the skin should be shiny and bright, fillets should be a uniform color with no graying or discoloration, and the fish should have a seawater-fresh smell. The meat is white when raw, but turns opaque white when cooked. H&G products and can be up to 12-14" and weigh 8-24oz. Pacific ocean perch has a nutty flavor with a lean and firm flake. 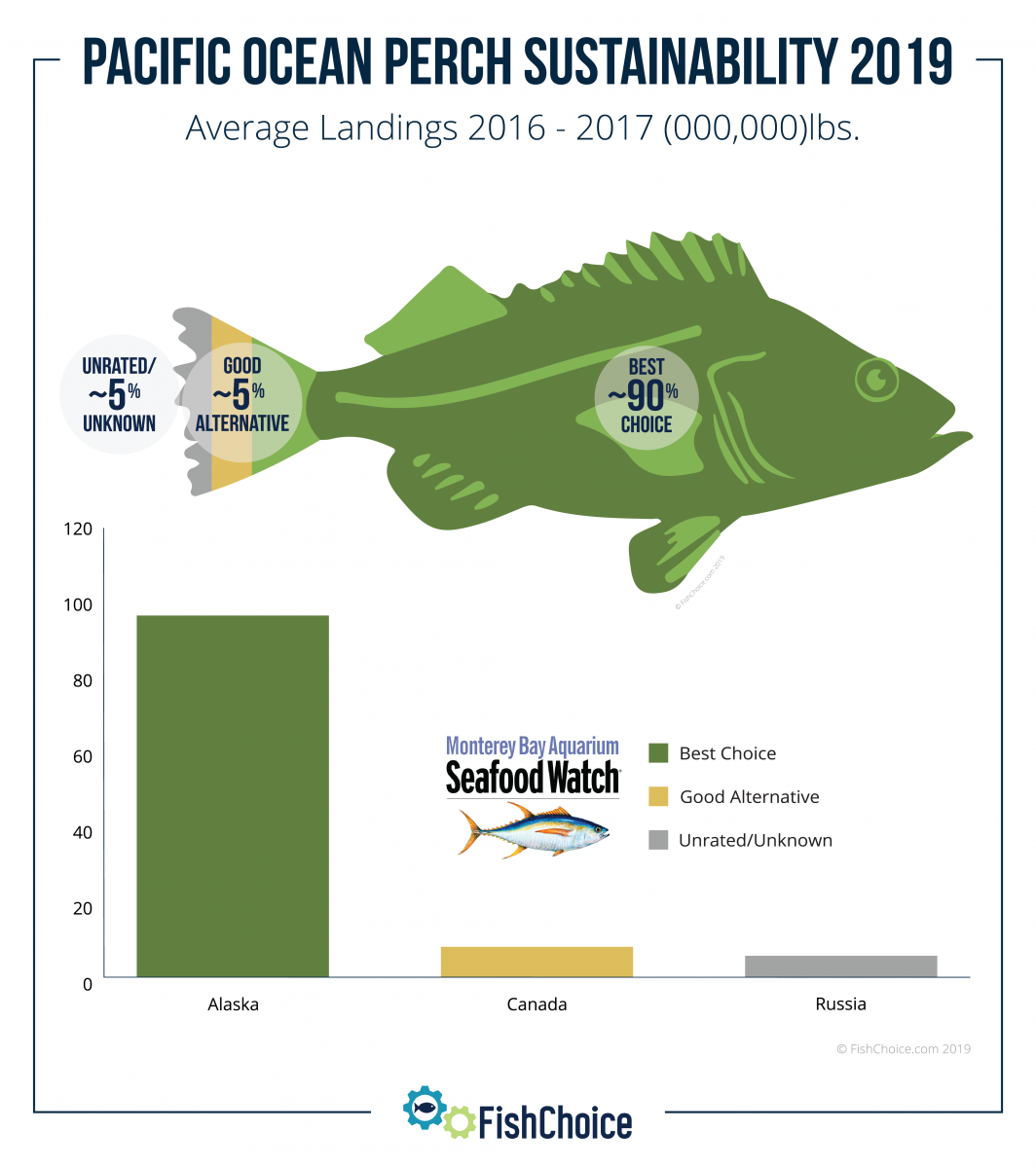 Pacific ocean perch are a rockfish, and part of the groundfish fisheries. They grow slowly, up to 20 inches in length and weighing 4 pounds. They live a long time, up to 98 years old, and begin reproducing around 10 years old. Females can produce between 10,000 and 300,000 eggs, depending on their size. Pacific ocean perch mate in the fall. The eggs develop, receive nutrients, and hatch internally, and the female release the live larvae in the spring. The larvae eat small zooplankton until they can feed on small fish and copepods, and move off their ocean floor habitat to follow the daily migrations of krill.

Juveniles are preyed upon by seabirds, other rockfish, salmon, lingcod, and other large bottom-dwellers. Adult Pacific ocean perch are often eaten by sablefish, halibut, and sperm whales.

Pacific ocean perch are found off the Pacific coast of North America from California to Alaska though they are considered less common south of Oregon. They tend to inhabit deeper waters of the upper continental slope and along the continental shelf. Adults will migrate to shallower waters in the summer and will migrate back to deeper waters in the fall and winter months to spawn. Larvae and juveniles live near the ocean surface whereas older juveniles and adults will live near the ocean floor, usually near sandy and rocky bottoms. Older juveniles and adults can also be found in areas with vertical relief as well as near corals and other structure forming invertebrates.

NOAA’s Alaska Fisheries Science Center is studying the reproductive biology and growth rates of Pacific ocean perch. The Resource Assessment and Conservation Engineering Division measures fish lengths and weights, and ovary weights, from samples taken throughout the year in order to determine reproductive biology and maturity. Effective management of Pacific ocean perch is dependent upon an accurate estimation of anatomy, biology, and behavior of the species. Current studies have found smaller and younger maturity estimates than previously reported, which may have important ramifications for Pacific ocean perch stock assessments.

Larval studies of Pacific ocean perch are made difficult due to problems with species identification, as most rockfish share similar morphological characteristics. Genetic analysis can identify larvae and juvenile species, but is both expensive and time consuming.

A biochronology spanning six decades, based upon previous findings, show that warm conditions are important for growth of the Pacific ocean perch. A negative correlation was shown between the chronology and spring sea ice cover. The next step to advance current research on the effects of climate change on Pacific ocean perch is to extend the chronology farther back to the turn of the century, and integrate findings with other ecosystem health indicators such as seabird activity.

NOAA Fisheries and the North Pacific Fishery Management Council manage the Pacific ocean perch fishery in Alaska under the Gulf of Alaska and Bering Sea/Aleutian Island Groundfish Management Plans. These plans set a Total Allowable Catch (TAC) for each species and limit the amount of fishing permits available. These permits are endorsed with area, gear, and vessel type and length designations. Catch quotas are allocated amongst the various fishing sectors based on gear type, vessel size, and processing ability. Catch is then monitored through record keeping, reporting requirements, and observer coverage to ensure catch limits are not exceeded. The plans also set time, gear, and area restrictions.

Alaskan fishers can participate in the Central Gulf of Alaska Rockfish Program. This program allows fishers to fish together in cooperatives that are allocated specific amounts of the TAC. The goal of the Rockfish Program is to spread out the fishery in space and time – allowing fishers more flexibility in deciding when to fish and when to sell their product.

A percentage of the Aleutian Island catch is allocated to the Community Development Quota Program. This program provides all eligible western Alaskan villages with the opportunity to participate and invest in fisheries. The goals of the program are to alleviate poverty and to promote and diversify economic development of the region.

Management measure in place for all Pacific groundfish fisheries also apply to the conservation and management of Pacific ocean perch and include:

Pacific ocean perch are managed by the Department of Fisheries and Oceans (DFO) in Canada.

Pacific ocean perch are found off the North American coast from California through British Columbia and up to Alaska. They have characteristics that give them high inherent vulnerable to fishing pressure. In 1999, the National Marine Fisheries Service classified Pacific ocean perch on the U.S. Pacific Coast as overfished. Under a rebuilding plan adopted there in 2000, Pacific ocean perch had reached 48% of its target population level in 2015, according to FishWatch. Stock assessments from 2014 showed that Pacific ocean perch in the Gulf of Alaska and the Bering Sea were not overfished and not subject to overfishing. A Seafood Watch report from 2016 called the stock status in British Columbia a low concern, but noted that the population in Queen Charlotte Sound was at its lowest point since 1940.

Most Pacific ocean perch are caught using bottom trawls although some are targeted by midwater trawls. Bottom trawling can have a significant impact on ocean bottoms although spatial restrictions help limit their use. In both the United States and Canada, measures such as area closures protect corals and sponges from bottom trawl destruction.

Trawl fishermen in Alaska can inadvertently catch Pacific cod, arrowtooth flounder, sablefish, halibut, salmon, and crab when targeting Pacific ocean perch, according to FishWatch. Seafood Watch reported in 2014 that sablefish, which can be caught in the U.S. West Coast non-hake commercial groundfish fisheries, have potentially exceeded the overfishing limit. In British Columbia, Pacific ocean perch are part of the groundfish complex, which has few fish species that would be considered traditional bycatch. However, bycatch of corals and sponges has been a concern, leading to the introduction of protective management measures in 2012.